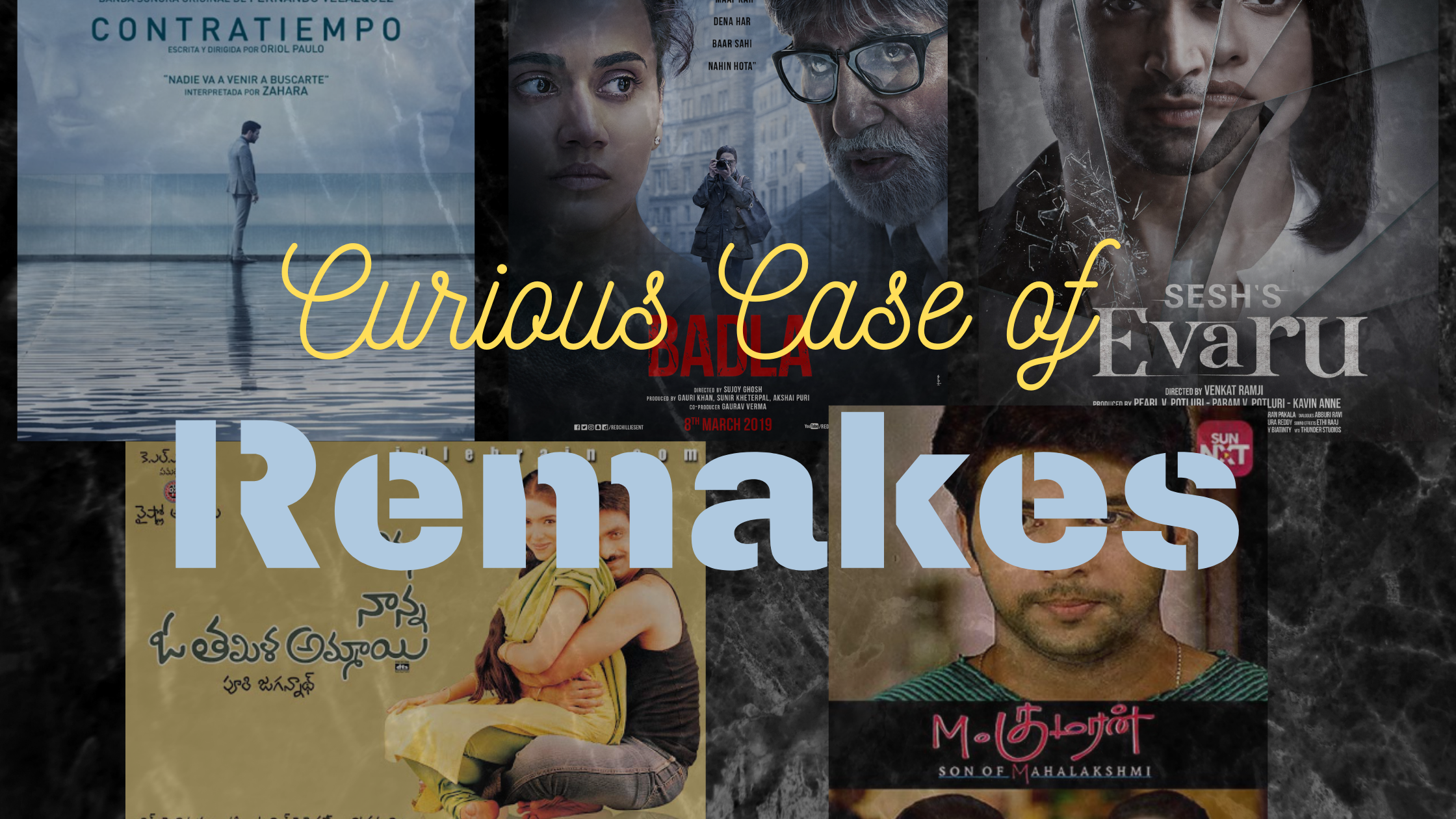 Hello readers, I’ve been wanting to write analysis posts for quite some time, but haven’t mustered the courage to do so. Now, going with a leap of faith with this first post on this experimental three-part series.

Remakes, whenever we hear this word the first thought pops into our head will be an instant comparison with the original movie. Is it wrong? Who am I to judge you? Remaking a movie is an art in itself. The directors, actors, producers everyone know what they are doing and are aware of the backlash they might get if the movie doesn’t fare, well. Even after knowing the risks why do they remake movies? What goes into the successful formula of Movie remakes? Let’s dive a little deeper into this topic. A word of warning before proceeding further, I’m not an industry expert but a mere viewer and the opinions/analysis expressed in this article is purely my observation and it is going to be on Indian cinema (Bollywood is not Indian Cinema😝).

What is a Remake?

The remake is a re-production of a Movie or a TV Series based upon its earlier production but with a completely new cast and crew. Usually, remakes in India are done to a different set of target audiences, and the plot, characters are designed to meet their culture, ethos, food, and sensibilities which are remade from other Indian language movies or Foreign Language movies. Bi-lingual, multi-lingual, Copy/Inspirations doesn’t fall under this category.

One need not compare the remake to its original for the movie to be good. We can consider how the particular movie stayed true to the heart of the original and delivered its own narrative, satisfied the experience of the viewers, and helped all other parties involved, its a win-win.

Why do they Remake a movie?

Historically, successful movies have been remade in many languages or a couple of other languages. The producers opted to remake these successful movies because 1. There is a story, characters, and everything setup which proved to be successful or can be called success formula movie 2. This assures the producers a minimum guarantee win and they can definitely get their ROI (Return on Investment) and gain a little bit of profit and 3. These movies also appeal largely to the Theatre owners owing to their popularity in other languages which in turn might bring in more foot-falls into theaters.

Indian audiences are habituated to see one person doing everything from Story, Screenplay Dialogue, and Direction. Some directors even went to the lengths of adding Music, Editing, Lyrics, and whatnot? According to Indian audiences, a Director is a person who does everything, and only in recent times, they have come to an understanding that a Director of a movie can just be a Director because that person has a sense of following a schedule and following the Screenplay. This happened after their exposure to Hollywood and other foreign language movies. Until recently, the directors who do remake movies are looked down upon by the audiences and Produces alike.

For the sake of easier understanding, I’m resorting to the movies which I’ve watched and also some popular movies.

As established earlier remake is an art and anything can go wrong when you remake a movie from one language to another. When a director chooses to go for a shot-by-shot remake it is not as easy as we think. The Director should be in a position to understand the reason for a shot, the mood of the scene, why the shot was placed in a particular way, and most importantly the character development and choosing the right cast who would suit the role. Personally, Mohan Raja or “Jayam” Raja has done a great job in this.

I don’t clearly remember the similarities between Telugu and Tamil “Jayam” and the same goes for “M. Kumaran S/O Mahalakshmi” and its original “Amma Naana O Tamila Ammayi” but I vividly remember “Something Something” and it’s original, having seen both it was astonishing to see the time and effort to bring an exact copy of shot placements, dialogues, and everything, except for Santhanam’s cringe comedy at times. Well, the movie was largely enjoyable, stayed true to the original, and was also successful. What more do we need? No, I’m not saying the movie with good box office numbers to be good but when the movie is good it must be appreciated.

Taking a core plot of a movie and remaking it to the current trend or the region/language the movie is being made is yet another tough task. There are very few movies that were successful and I would like to quote the Bollywood movie “Don” with Shahrukh khan totally reversed the idea of the original movie, which really worked. After the success of Don in Hindi, in Tamil “Billa” was made and this time they didn’t remake the Hindi Don but making slight changes to the old Billa movie.

“Ghilli” (Tamil) was an official remake of a Telugu movie “Okkadu” which had Mahesh Babu as a lead. They took two primary things from the movie, one the lead being a Kabaddi player and the heroine being harassed by a thug and with this core, Tamil director Dharani gave a fantastic Commercial movie that had every element to it. I also want to appreciate the director of “Evaru” (Telugu) which was the Official remake of “Badla” (Hindi) which again is an Official remake of “The Invisible Guest” (Spanish). So to speak the original Spanish movie was well made and it had some interesting elements to it. When The Invisible Guest was made in Hindi, they reversed the gender roles which was interesting and added a little more flavor to the movie. again when the same movie was remade in Telugu they added more suspense elements to the story which elevated the experience. So, to speak Evaru was my favorite among the three even though it was a remake it stood good as an independent movie.

It is not easy to remake a movie and making it relatable to the audiences to whom the movie is being told. The Directors should put as much hard work into the remake movies as the movies with original stories. If you, as an individual feel the movie didn’t sit well with you, it is understandable but looking down upon them and mocking them does nothing fruitful. Original or a Remake, ultimately they are movies and they need to be watched as an independent movie and understand if the plot and the characters were justified. I’m not suggesting to appreciate bad movies, NO. Calling out bad movies will help the Industry thrive with good content but all I saying is remakes must also be treated as an individual movie.