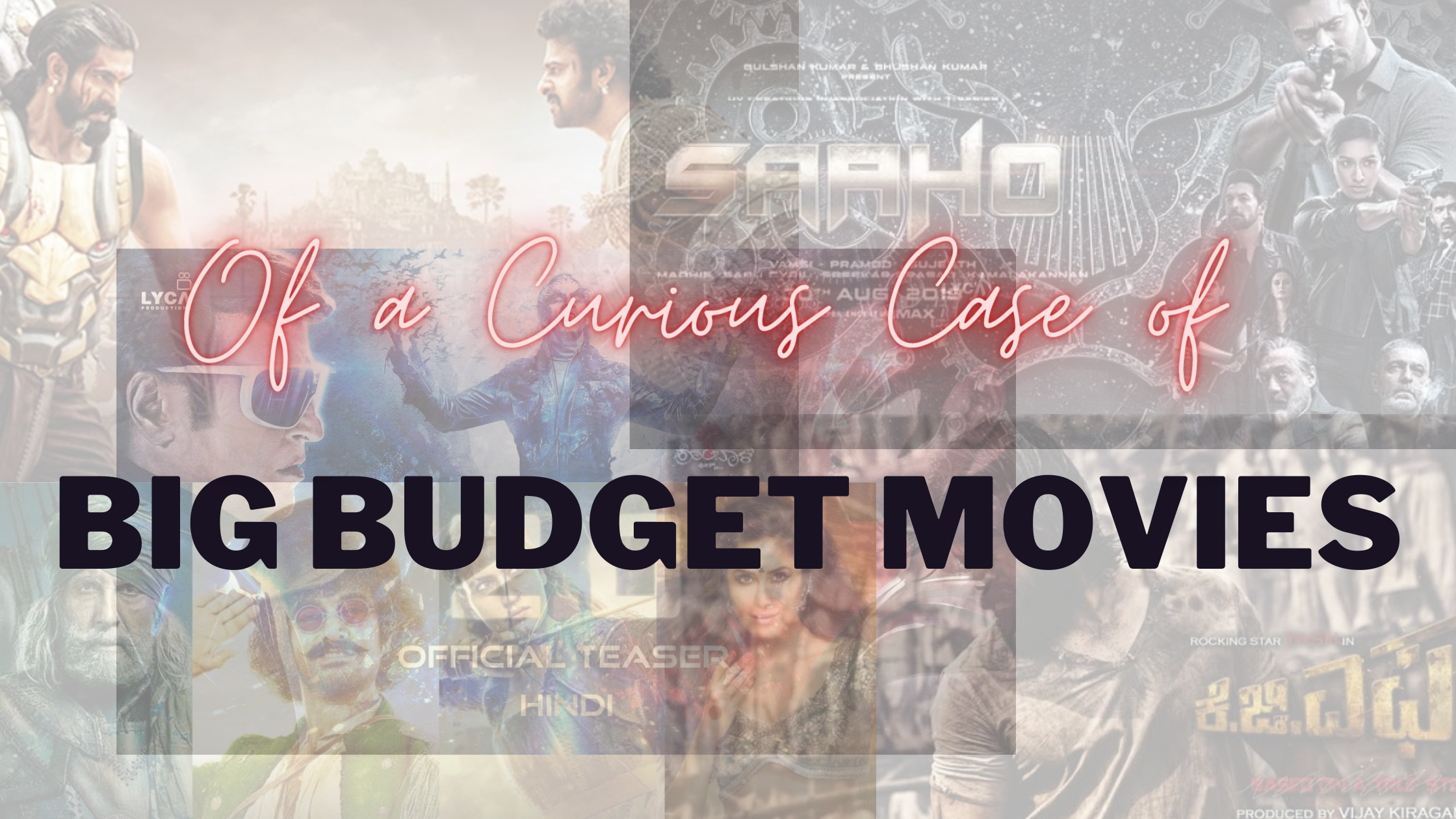 In our second post on the Three-part blog series, we are going to talk about the Big Budget films of the past decade, which changed the landscape of India Cinema and also shed the spotlight on some of the Regional Cinema, let’s delve a little deep into this.

You can read the First post of this series here.

The views expressed in the blogpost are purely my observation on the Indian Film Industry and I’m not an industry expert. The Cost of the movie is shared based on the data available in the public domains.

We all know the concept called Films came into India very late like every other technology, but we have been one of the largest producers of films in the world. Excitingly we are also the only country in the world with multiple language film industries (16 Languages approx.)

With such a rich mix of languages, we produce so many movies in each language to satisfy the entertainment needs of our people. Before films, we had other art forms such as Theatre plays, Street plays, puppetry, and much more. Then we slowly transitioned to the large screen film-watching experience.

Big Budget movies have always been a status symbol of an Industry and the respective fan base of each Film Industry in India do more chest-thumping about the budget of the film than the quality of the film itself. That being said Savitri, a 1933 Telugu Language film is said to be the first expensive Indian Film produced by East India Film Company, says Wikipedia. From, then on there have been numerous movies from various languages tried to claim the limelight for themselves.

Psst… This blog post itself is more of a chest-thumping one. Read on 😛

Bollywood and its dominance:

Bollywood, its artists, and the fans always have kept themselves as the forerunners of the Indian cinema which stopped people from exploring other Indian Language movies. Just like how Hindi speaking population is dominant and wants their language to be Ubiquitous for the whole of Multi-lingual country, the Hindi Cinema aka Bollywood also kinda did the same.

For a very long time, Bollywood Cinema kept other languages at bay but every now and then a Bengali or Marathi film grab that limelight with auteurs like Satyajit Ray, Ritwik Ghatak, and many more, who shared those glorious initial days of Indian Cinema.

For other language movies, it was really hard to grab the eyeballs of the entire country or atleast a sizable number of new audiences. If a certain film industry grabs a new set of audiences they will be on the path of development. That’s where these Big Budget films come into place. Now, with the dominance of OTT platforms Non-Bollywood Movies (NBM) get their due and more people moving towards these NBM.

Back then these NMB’s need extra budget to be distributed to other regions and thus Big budget movies were used primarily to gain the focus on these other Film industries. Even though Tamil Film Industry aka Kollywood tried to get its limelight on various occasions starting from Chandralekha (1948), a Bi-lingual movie, Indian (1996), Ratchagan (1997), Jeans (1998), Sivaji (2007), Dasavataram, Ghajini (2008) and Enthiran (2010) the attention dwindled after the movies were released.

Only after the Bi-Lingual film like Baahubali: The Beginning (2015) which primarily had actors from the Tamil and Telugu film industries, the South Indian Cinema got its due and I personally feel Baahubali was released right on time when the OTT platform was on the rise along with larger Internet penetration (these being indirect factors) gained more popularity across the country and as a result, Telugu and Tamil Cinema came back to the limelight.

When the Baahubali franchise was announced and told to be one of the big-budget movies from the Telugu Film Industry aka Tollywood, not only the fans were happy but the whole of India was awaiting its release. Baahubali was said to be of the dream works of Director S.S. Rajamouli, before starting this huge project, he tested the waters with movies like Magadheera and Eega. Both these movies were received well and S.S. Rajamouli understood the pulse of the audience.

The first part took a lot of time in the making and was shot both in Tamil and Telugu simultaneously with the same cast. The movie was then dubbed into various other languages before the release. The movie was received well across the country, upon seeing this huge success from Telugu Industry the entire nation, even the World started noticing the South Indian film industries.

After Baahubali: The Beginning:

Upon the success of Baahubali, as usual, Bollywood wanted to gain back its limelight. So, “Thugs of Hindostan” came back into focus after it was put on hold for some time. The project was announced in 2016 and was released in 2018. In the meantime Baahubali: The Conclusion was shot and released in 2017.

After the success of Baahubali, many other Film Industries want to try their hands into the Big budget movies and few really did succeed but most of them were flops. The prime reason for these various film Industries in India wants to have their own big-budget movies is to gain attention to their Film Industry and also the huge ROI’s.

Why many Big Budget movies in India flop?

For the case of easy understanding let’s take the movies like Thugs of Hindostan, 2.0, and Saaho. All these three movies had one common problem a bad story and the worst screenplay. 2.0 for instance could have been filmed within 150 Crores and that movie really didn’t need 570 crores. Well, if you are going to defend the quality of graphics, it was poor too. The movie really didn’t need someone like Akshay Kumar who just appeared for very few scenes. The director lacked planning and I’m sure out of 570 crores atleast 50% would have gone to the casting alone and they should have gone to the movie with that remaining budget.

The same goes for Saaho and Thugs of Hindostan, in the name of Big budget these directors bring in big names but give them very little screen time for which they could have cast some other actor. I wish the directors cast actors who would fit the role and not for the sake of them having good reach. If the product is bad customers don’t care about the brand value. It is still a bad product.

Big Budget movies in a way are required for an Industry to reach beyond its borders and few Industries and movies across the world have definitely done that. Also, after they reach the Industry and the stakeholders (Producers, Actors, Directors, etc.,) should produce quality movies, if not their movies won’t fare well and they will not get back their Return of Investment. Produce quality movies be Big budget or stringent budget. People are increasingly loving to stay at the comforts of their homes with the rise of OTT platforms and apart from Tamil Nadu watching movies in theaters is a Luxury, if you want the audiences to walk into the theaters, the quality should be of utmost importance than anything else.

Justice League Vs Teen Titans is the seventh film in the DC Animated Movie Universe and seeing the title one would assume that there will be some amazing stunt sequences with the members of Justice League facing off with Teen Titans, but that’s not the case which is very disappointing.