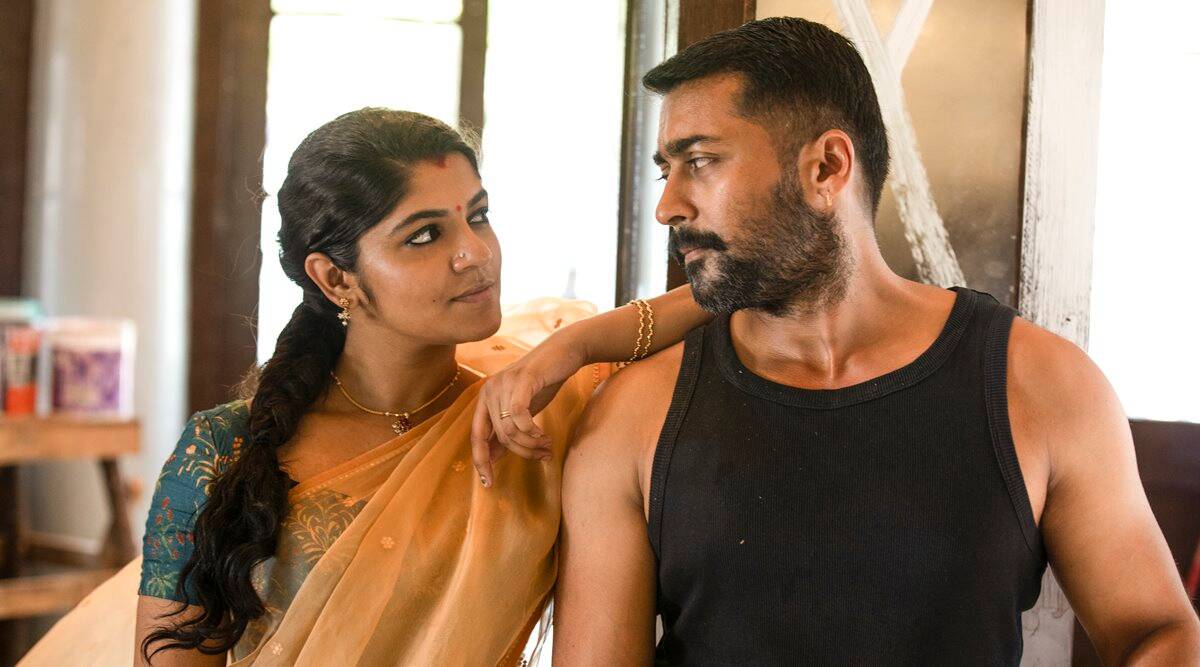 “Dreams are not those which comes while we are sleeping, but dreams are those when you wouldn’t sleep before fulfilling them – APJ Abdul Kalam”

Dreams shouldn’t necessarily be big but one must dream to do something in life, Be it Maaran or Sundari they had their dreams to do something in life. This is what I liked the most about Sudha Kongara’s Soorarai Potru, it treats the dreams of both the leads equally and they both start and build their relationship on mutual respect for each other and being there to support each other’s journey in achieving their dreams.

I haven’t read the book Simply Fly: A Deccan Odyssey by Captain Gopinath but the director was clever enough to take the inspiration from the book and add masala to please the audiences. We are a funny bunch of people who can’t sit through a Biopic-drama but love a Masala biopic. Even though everything was mentioned clear there are few problems with the movie, which we will discuss later.

What Soorari Potru does best is catching a man’s passion, an underdog who beats all the obstacles to achieve his dream of starting a low-cost airline. The movie is not only about Nedumaaran’s Rajangam victory but of Suriya’s as well. Off late actor, Suriya has been facing failures and with this movie, we see the actor who we all missed lately. Suriya by and large carries the movie on his shoulders with his anger, love, egotistical maniac, and someone who couldn’t reconnect with his father after a big clash. We along with him feel all those emotions and I would say actor Suriya is back with a bang.

Aparna Balamurali on the other hand steals the show whenever she is on the screen. Be it that introduction scene where the dynamics are switched or as the one supports her husband during testing times. The onscreen chemistry of both the leads is terrific and her character was written very well. I wish that scene where Sundari being hit by Maaran could have avoided, which is really unnecessary.

Urvashi as a desperate mother, when she stands in-between the father and son ego war or when she cusses her son for not repenting with his ailing father she does a wonderful job as always. Karunas’ Allaparai plays a trivial part in the movie still he gets an opportunity to shine and the same goes for Kaali Venkat. Mohanbabu as a strict commanding officer could have gotten more screen time than he is now. G.V. Prakash Kumar with his music brings life to this movie and acts as an important pillar. We wish to see more of your music.

Some of the largest problems with the movie are the villain, Paresh Rawal. His character was one-note and we don’t see more depth in his character. Even though the movie is about Suriya, a strong Villain with better motives would have given a better watching experience. The character is almost a cliché which we see in all such movies. Sudha Kongara could have fleshed out the character well.

I was able to guess some of the things before it happens, well it is good that people of the village come to save Maaran but why are they doing that apart from a motive of him starting a low-cost airline? Maaran’s reason for starting a low-cost airline has a strong reason, no doubt but meeting the President just like that adds more to the Tamil Cinema’s heroism trope.

Overall, the movie works largely for me, but there are few intricacies where the director could have worked better on the motives of the villain and also a character transformation of Suriya from being an angry young man to a calmed down a person. The movie has so much heart but the screenplay needs a little more tinkering, which would have made the movie a Case study on making a masala biopic but it fall short on that.