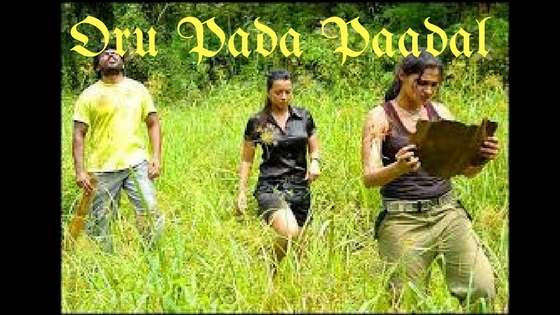 Aayirathil Oruvan is the album next line. After 10 years of its release now the movie is getting the spotlight it should have received then. G.V.Prakash Kumar’s finest work till date. He definitely had to fill the void of Yuvan – Selvaragavan combo which gave five consecutive hits. I remember mentioning about the Indiana Jones style in the first half of the movie and the second half of the movie was a travel back to the time of Kings. GVP’s BGM and the songs played a huge part in the second half of the movie. This album features six songs, two mix versions and 2 themes which don’t include “Adho andha paravai” from 1965 movie of the same name.

This song is set up when the movie took some twists and turns. It has a very captivating music with Karthick and Andrea crooning their voices for Tamil and English respectively. Penned by Selvaragavan and Andrea. I absolutely loved the stunning visuals of this song which reflects the English album feel.

I remember watching the Audio launch of this movie on TV and was excited to see Dhanush, GV, Andrea and Aishwarya Dhanush singing and dancing. Such a peppy number it is, penned by Selvaragavan. Apart from the voices, I hate the lyrics for its highly misogynist nature or is it only me who thinks that way? Perfect song for after sarakku parties when you are in a dancing mood.

A song which depicts the state of the once royal Chozhan king and his empire. The prelude of this song uses “Yaazh” an old musical instrument which isn’t widely used these days and the whole song is filled with the music of “Udukkai” an instrument which is known to be used by Lord Shiva. Tamil lyrics is penned by Vairamuthu and rendered by Vijay Yesudas whose emotions are clearly visible through Parthiban on screen. I lost words seeing and hearing the song, my goosebump and the sad moment is when the poor king yearns Puli kodi poritha chozha maandhargal, eli kari koripadhuvoo!
Kaatrai kudikkum thaavaramaagi kaalam kazhipadhuvo!
Mandai oodugal mandiya naatai, mannan aazhuvadhoo! Mannan Aazhuvadho!
Telugu lyrics of this song is penned by Vetturi Sundararama Murthy and rendered by Nithyasree Mahadevan.

It is an instrumental where the king and his people enjoys the camp fire along with some drinks to celebrate the new winner of their barbaric game. One can make their own assumption but I see it as a meagre enjoyment they have in their sad and pathetic life. I am unable to identify the instruments used but the particular fluteish music is unique accompanied with the drum beats is truly a music to celebrate.

Another song penned by Vairamuthu. Yet another song about the sad state of the Chozhas and their king who lost a war with the Pandiyas and their Military. This song marks the comeback of legendary P.B.Srinivas and the lady’s voice is rendered by Bombay Jayashree. The tone of the song itself is set to feel the pain and the yearning of the Chozhas and propagates their royal life which went into drains.

Maalai neram another beautiful song rendered by Andrea is one of my other favourites from this album.

G.V. Prakash Kumar very much musically talented and proved that on multiple occasions in various movies. This particular movie is one of his best compositions and he clearly would have had a bright future if he had continued to only compose, instead he went on to pursue his acting career and his music is deteriorating by every other movie. The BGM in this movie has a stark difference in the first and second half. The first half has a racy adventurous tone were the second half has a worried tone of music throughout, except the war sequences. It would be appreciable if he comes back to composing instead of acting.