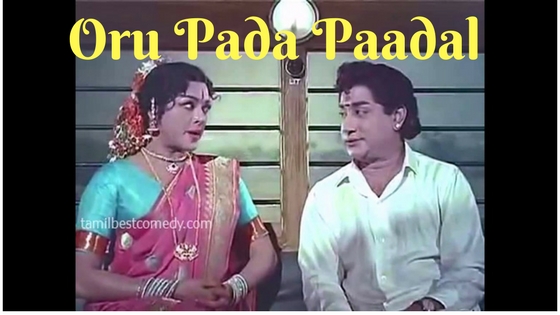 This post was written by my Friend Vidhya who blogs here. She is a trained Carnatic Singer and also writes about Carnatic Music in her blogs. Please do read her blog to know about various artists, vidhvaans and ragas.

When Pratip and I were discussing about the guest post for KV Mahadevan in his series Oru Pada Padal, we started off with Sankarabaranam; then I texted him saying I might write Thiruvilayadal. No, that would have taken minimum 3 part post. Then it struck me; Thillana Mohanambal – how did I forget Sikkal, Mohanangi, Jillu, or Vaiddhi! A movie about coming together of two artists, and a celebration of two art forms. So here goes…

The movie itself is an adaptation of the tamizh novel by the same name. It is about a Bharatanatyam dancer and a Nadhaswaram player falling in love after some initial differences at a concert. But her family and unfriendly opponents create a challenge in their coming together.

The film’s soundtrack and score were composed by K. V. Mahadevan, while the lyrics were written by Kannadasan. It is one thing to compose or play music for a film, but nadaswaram vidwans MPN Sethuraman and MPN Ponnusamy gave life to the character Sikkal Shanmugasundaram.

There are 6 songs in the movie and I just noticed that all of them are stage performances/concerts in some kind or the other. Reserving the lyrical and popular songs for later, let me first talk about the beautiful instrumental pieces in the film.

My favourite number in the movie is the sequence where Sivaji Ganesan and troupe performs outside the party hall, as it is accessible to the general public too. They start off with “Aayiram kan podhadhu vannakiliye” which is incidentally a movie song from Pavai Vilakku, also scored by KV Mahadevan. This song has been set to raga Maand.

Later, they continue to play western notes, as per the English Durai’s request. This notes / nottuswaram as we call them was composed by Carnatic composer Harikesanallur Muthiah Bagavathar mimicking the western compositions and set in C Major scale. The western notes are popularly known as Madurai Mani Iyer notes, after the musician who popularised it through his many concerts.

The first performance of Sivaji Ganesan and AVM Rajan in the movie is the song “Nagumomu ganaleni”. Our movie heroine Mohanambal also gets introduced in this song. The song is originally a Thyagarajar composition set in Aabheri ragam, but in the movie, only the first two verses are played followed by a bit of improvisation, before it gets interrupted by fireworks and drama ensues.

This is the song that depicts the intense competition between Sikkal Shanmugasundaram and Thillana Mohanambal. The melody kick starts with a Lalgudi Jayaraman’s thillana in ragam Kanada, but it is the brilliance of KV Mahadevan to incorporate ragas like Bageyshree and Kaapi that adds to the lustre.

Nalandana is the song that is featured during the collaborative performance of both the nadaswaram and the bharathanatyam ‘sets’. It resembles raga Neelamani to me, a raga aptly chosen to embellish the pathos mood of the story at that point in time.

This popular dance number set to tune in raga Shanmugapriya. Padmini carries off the entire song with grace. She, emoting the navarasas in the song, is probably the reference point (at least for me) to those emotions. P Susheela has lent her voice to both this song and the previous.

The song that takes off the heaviness of Carnatic music throughout the movie, this breezy folk by Jil Jil Ramamani is a welcome variety to the music album. The song is rendered by SC Krishnan and LR Eashwari. Who else but Manorama could convincingly perform and do those dance steps like a man.