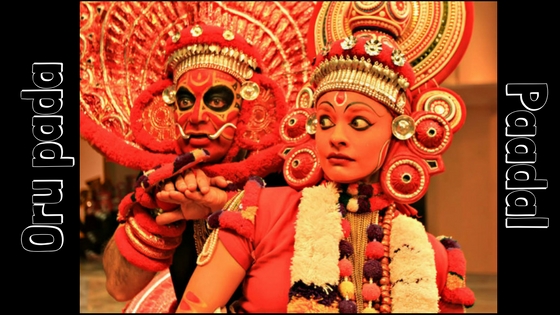 I requested my friend Arun to write this post because when I started this series he suggested me to spotlight Music Director Ghibran who is underrated and underutilised. Apart from few of his albums I haven’t listened to all. Hence, I requested him to Guest post for me and I believe he happily agreed to 😛 and over to him.

Uttama Villain, one of Kamal’s recent masterpieces, featured a newbie in Tamil music industry, Ghibran. Why would a big shot like Kamal sign up a newbie for not just one, but three consecutive movies of his? Well, any fan of Tamil cine industry will know how trained and talented Kamal is with regard to music. And, if we are to comment whether Kamal’s judgement is in any way lacking, we are reassured once again that it wasn’t. For Ghibran delivers a magnum opus that does not stay just as a lingering element in the movie, but acts, actually, as one of the guiding forces of the movie. The album Uttama Villain features 17 performances that include 7 instrumentals, 3 Karaoke versions and 7 songs.

The song that lampoons Kamal’s own, and a few other senior actors’, conduct in Tamil cine industry doesn’t, however, manage to convey its intent. The satire was not clearly visible and the music wasn’t good either. Probably it was deliberate but could have been better. The unwanted techno music during the bridge of the song was more than irritating. If this single song was provided as a sample for this album, I would probably lose heart to listen more from this album.

This song that beguiles Mutharasan into believing that Karpagavalli had given in, is marked by fluid dance movements and melodious Carnatic music. Of note is the throbbing drumbeat which carries the song through its completion. Avoidance of any electronic/digital, and usage of only traditional, instruments adds more élan to the song.

The fusion between Tamil Nadu’s “villu paatu” and Kerala’s “Thaiyyam” dance form is rendered in such an eye-catching fashion that one who appreciates art cannot help but watch it with their mouth agape. It is, of course, no little feat to have utilised, in an era of head-spinning digitalisation, purely conventional musical instrumentals in sculpting this song. A big kudos to Ghibran.

What immediately follows is Uttaman Kadhai but it is best to clump these two songs together for the purposes of comparing and contrasting them. Kamal’s narrative voice in both the performances, his flawless pronunciation and the poetic element are so wonderful that one will not tire of it no matter how many times one listens. Ghibran so skilfully maintains a powerful chord throughout Mutharasan Kadhai, symbolic of king’s power and a sort of comical tone throughout Uttaman Kadhai indicative of Uttaman’s character. I suggest you, reader, to listen to them sequentially and you will understand the genius of Ghibran.

This very short song that basically caters to the audience one of the takeaways from the movie features some of the never-before-used instruments used in Tamil cinema such as Jal tarangs. The song is laden with rich lyrical meaning and is actually rich in its wordplay—for example, the line “seyyul pol oru kaathal vendum” can be interpreted in a minimum of 2 ways by any listener. The chorus “kelaai manna!” feels like yet another evergreen chorus such as the overused “thaandavakone!” or “gnaana penne!” And is informative as well—including references being made to Kaniyar, ancient Tamil mathematicians; to abiogenesis; and the sun growing in size and consuming the earth. All in all, one of the defining songs of this movie.

The final song of the movie—personally speaking, my favourite—is not just a visual treat but also an auditory treat: thanks not just to lyrics but also music. The song marks some of Kamal’s personal beliefs and is a cornerstone in Tamil song sequences. The closing chant “Hari Hari” was rendered comical—the way Kamal would have wanted—thanks to Ghibran’s breath-taking music. I, of course, am at loss of words to describe the content of this song. The song ends with a man killing the god (Kamal’s atheistic stance), a deliberate satire of Prahalad’s story.

Although a separate subheading was given to instrumentals alone, I cannot help but dedicate a paragraph to the theme song. The song features a coarse kind of voice that is meant to mimic asura (villain) and the chant “mrithunjayan,” the key theme of this movie makes it worth listening to. And what is noteworthy is the inculcation of the fear element in the music suggestive of a dangerous villain. The drum beat throughout, rarely used in other pieces, manages to just “hug” the whole performance and guide it through its completion.

Ghibran’s prowess as a music director is evident perhaps in the instrumentals and karaokes, for the songs distract a casual listener from paying much attention to the music. Instrumentals titled Uttaman & Karpagavalli, Father & Son, Father & Daughter, and Guru & Sishya, I would argue, needn’t even be named explicitly so, because these four, if listened consequently to compare and contrast, will show the genius of Ghibran where he manages to capture in such a perfection the nuances between the concerned characters. One can finger where and when and why a particular instrumental play—such is the exactitude of Ghibran in conveying the scenes.

The instrumental Dr Aparna features one of the most poignant, unparalleled, and sweetest string music in Tamil music industry—I assure you that only if you will sit back, close your eyes and listen, will take you to a different world altogether. This very short music will leave you yearning for more. Letter from & to Yamini starts off with a very smooth two-toned piano music, with a mellifluous string accompanying it; oh, and the crescendo, alongside the female voice just would make you cry, if you are an emotional type.

The bottom-line observation about Ghibran:

No doubt that this album is, in every single way conceivable, a unique venture in Tamil music industry. The karaokes and instrumentals exhibit such an extremely strong and powerful symphonic orchestration, the kinds which one can expect only from Ilayaraja or Ravi Shankar (no, not even ARR). Ghibran, sure, is tremendously talented in orchestration and is unafraid of failures. What, however, he should add some more focus on is the individuality of each tones—although he makes such grand orchestrations, the instruments sound in a way hodgepodge without much differentiation—most of the times all of them blind together and make it difficult to follow the path taken by each and every instrument. But that is not to say that Ghibran is in any way lesser; he is one of those rare up-and-coming music directors with such a remarkable potential.