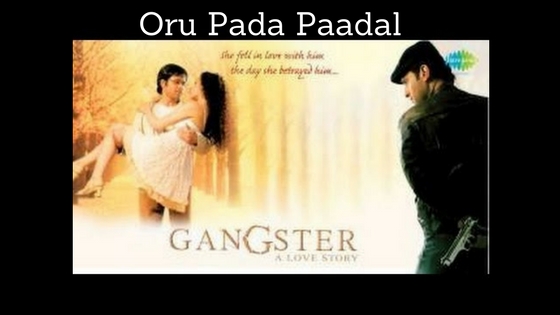 I requested my good friend Srilakshmi Indrasenan who blogs at iamStri. I don’t listen to much Hindi songs except for a selected few and she suggested she would do this and Thak you for that Srilakshmi and over to her.

Music Director in Focus: Pritam
Album: Gangster
The movie was released in 2006. Those were the times, when I used to ogle at Emraan Hashmi. My sister and I went FDFS for this movie just for Emraan. Shiney Ahuja wasn’t famous or rather “infamous” back then and this was the debut movie for Kangana Ranaut. The trailer was quite appealing, especially the “Ya Ali” music in the BGM. Also, the concept seemed intriguing– a drunk girl, a bar singer, and a gangster – Ah! Those were the days of love triangles. I even remember the tagline on the poster – “She fell in love with him, the day she betrayed him.”

Speaking of the music, until I watched the movie, I haven’t heard any track except Ya Ali. After watching this movie, both my sister and I were addicted to the songs – and I’m happy to say that I am still addicted. Pritam Chakraborty has been in the industry for 17 years now. However, he started being a solo music composer only in 2004 for Dhoom. While I love most of his songs, I would easily call Gangster is the best album.

There are primarily 5 songs, 3 mix versions, and 1 remix – making it totally 9 songs. I am going to talk primarily about the 5 main songs.

This is one of the best songs till date for both Emraan and Pritam. Yes, there are many more lovely songs by the duo, but this easily takes the first spot. I don’t know if it’s the mesmerising voice of KK or the magical verses of Sayeed Quadri, this song just enters into your hearts and melts it delicately that at the end of the song, you will feel weak on your knees. This song is perfect for almost everything – be it long drives, nighttime lullaby, slow dance, party number (mix version) or date night.

Better known as “Hamaari Adhoori Kahaani,” this song is quite opposite to the previous song here. While Tu Hi Meri Shab Hai calms your senses, this song just hits your senses like a shot of espresso. Not-so-well-known Bengali singer James rendered his voice for this beautiful song, and the fast-moving happenings in the movie during this song will just keep all your senses hooked. The lyrics for this song were by Mayur Puri.

Penned by Neelesh Misra, this song was sung by Abhijeet Bhattacharya and Sunidhi Chauhan. The visuals of this song are so dreamy that you cannot resist falling in love with the lead pair – Emraan and Kangana. Also, this was one of the boldest performances of that time by a debut actress. I would even call this the best ever debut performance by an actress in Bollywood. If I die without slow dancing for this song with my significant other, I would probably roam as a ghost with this as an unfulfilled wish.

Another song penned by Sayeed Quadri, Mujhe Mat Roko by Kavita Seth is just poignant. If listening to this song doesn’t give you goosebumps, I don’t know what will. How will you feel when you betray someone and get betrayed at the same time? Well, this song is the answer. There aren’t many female-centric sad, love failure songs. I always wonder why, but this one song does justice to the genre totally, and this is the one love failure song we all need.

Another Sayeed Quadri number, Ya Ali was rocked by Zubeen Garg. Yes, I wouldn’t call this singing, but this was some serious soul-stirring rocking, smashing, and killing – all in a positive way, of course. If you haven’t shaken your legs for this song at least once in pubs during Bollywood Nights, it’s high time that you do it at least now. Writing this I remember all the Nautanki dance moves we did in our college night parties for this song.

While songs in Dhoom were totally peppy and dance-worthy, this movie showed the versatility that Pritam displays in his compositions. From a tragic love song to a racy, feet-tapping number, Pritam just takes you on a musical ride with this album. The BGM of the movie, again by Pritam, was just so perfect – be it during emotional scenes, sensual scenes, or racy sequences. One of the most worthy, subtle BGM mentions would be the one during the terrace conversation between Emraan and Kangana – the whole scene is just flawlessly perfect. While this movie did decently well in the box office, I would still call it one of the underrated movies in Bollywood.