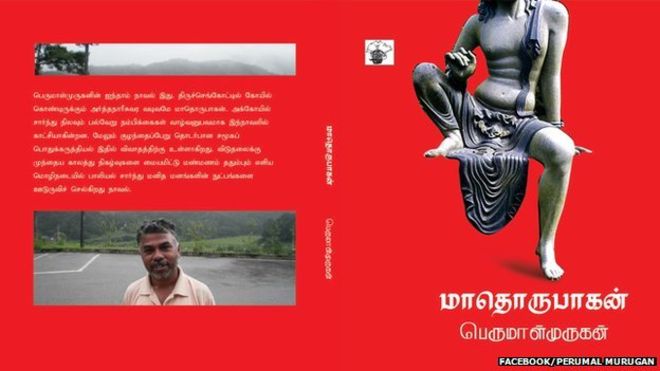 All the controversies surrounded this book made impossible for me to acquire it for a long time because it was banned in Tamilnadu for various reasons and the major one being caste. Though the Author claims this work to be a faction, we are unsure of such event took place. We don’t have any proofs of such event nor the author found any. Though I fail to see a reason for pushing a writer to Write his own obituary on a Newspaper. Well, that set a dramatic stage for Author, his supports and the opposers. It is disheartening to see people who are still stuck with their casteist ideas and considering it above all.

The Novel starts with Kali visiting his in-law’s house along with his wife Ponna for a yearly famous 14 days festival and the 14th day of festival plays the pre-climax portion in the book. Perumal Murugan set the stage there and went backwards to explain the actual reason for Ponna visiting her parents and Kali visiting his in-law’s. He touched upon Villages, their customs, Agriculture, food behaviour and most important of all people their narrow mindedness and openness. A stark contrast in the characters.

I adore the plot for deep and psychological point of a couple for their inability to have a child. When society and people ridicule them equally on various stages of life the mental stress and agony they go through were clearly captured by the Author. Nallupayan chithappa the one character who is rationale, a jerk but always knocks some sense into Kali.

It is completely a new experience for me to read a novel in one of the regional dialects Kongu Thamizh. For some, it might be hard to read through and certain intricacies with the Kongu dialect and the words used. I didn’t find it hard because I lived in that region for half a decade.Perumal Murugan gets brownie points for painting the scene and landscape with words.

The book was very lengthy for the premise it chose and half the book was about their yearning for the inability to have a child. People ridiculing this couple and various other incidences.

I wouldn’t mention this as an amazing novel nor it is mediocre but definitely, this novel would make you think and question various aspects of our society. Controversies and alternate ideas are always intriguing. I can’t agree with the author about certain practices he mentioned in the book because of insufficient or no proofs, but we might assume such things could also have happened. I personally liked the idea of ending this book with question marks and the Author wrote two other books with two alternate endings. An intriguing book which was translated in English and recently won “Sahitya Academy award” well a round of applause for that. I call it a Maadhorubaagan Trilogy and this is the review of Book 1.