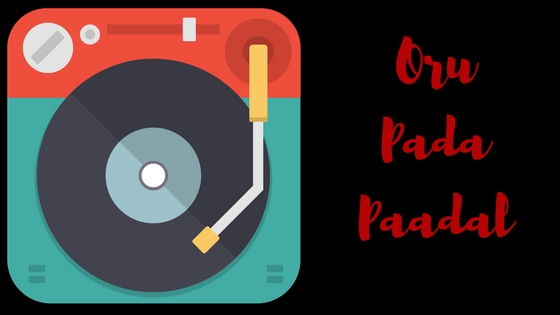 If, this title reminds you something sure you were one of those 80’s or 90’s kid who used to listen to this particular show in All India Radio. The show will play popular songs of that time from one particular movie and I think that show spans for 30 minutes. I tried to dig my vague memory but couldn’t remember because I was a child back then 😛

I’m starting a New series. Well, I’m lazy enough to post one on a daily basis but I will try and post atleast once a week. The inspiration for this post came from my friend Megha who wrote two blog posts on Quora. The songs were from two movies composed by A.R.R and here are the links for those two posts Rhythm and Kandukonden Kandukonden. I am not going to stick to one particular Music director but varied ones. Starting this series with my favourite Movie and my favourite music director.

I assume no introduction needed to this movie. Truly a musical gangster movie I would say. Yuvan experimented with his musical finesse in this movie and it came out extremely well. Album came out with six songs and four instrumentals. Four of those songs and instrumentals featured in the film but two were not, which happen to be my most favourite one in this album.

It all comes down to this “Oru Naalil”

This song is one of my favourites in this whole album. Penned by Na. Muthukumar & Selvaragavan. It was rendered by Yuvan himself. What attracts me to this song is the violin piece after the Pallavi. Lyrics depicts the life of a gangster “Kokki Kumar” in the film from start to where he was struck. I really wished Selva could have shot this song and played it at the end credits of the movie.

This song comes along the story and I love this song for its lyrics which was written by Na. Muthukumar and sung by Ulaganayagan. I am not sure why Yuvan chose Kamal for this song but I couldn’t imagine this song without him because he perfectly emoted the feel of a Gangster who had to hold his life until the next day. The lyrics and the emotion perfectly synced with the way it was shot. Prelude of this song pushes you into the rush and tension of the gangster. You couldn’t place this song in any type because of its mixed nature.

A fast number which was shot majorly in the fisherman’s area of the city. I remember this is one of the songs which played umpteen times in various events those times censoring some cuss words in the beginning of the song. Sung by Dhanush (Rap part majorly), Premji Amaran and Yuvan. The First part and the song followed by the interludes were shot in the market set which had its grandeur.

This song mostly contains the music part except for the “Variya” part here and there and few lyrics at the end. Well, I remember this been played in the radio stations umpteen number of times and it was also a chartbuster once. The song is placed in the movie where “Kokki Kumar” gets accepted as a henchman.

This song particularly has some intriguing music (To me at least) which gives you a kind of local party feel. The Song is setup in a marriage function with all its setup and feel. A kind of violin music in the interlude gets you trippy. Sung by Vijay Yesudas, Tanvi Shah, Premji Amaran and Yuvan.

An out and out experimental album from Yuvan and he tried to explore various aspects. Songs mostly penned by Na. Muthukumar gives us a raw feel to this album. I would definitely say Yuvan tapped the character of the lead and emoted with his music brilliantly. I don’t have a particular reason to choose this movie first. I had few more albums of Yuvan but thought to start with this because when this movie released Yuvan was at his peak.

Here, the complete Jukebox of this album: