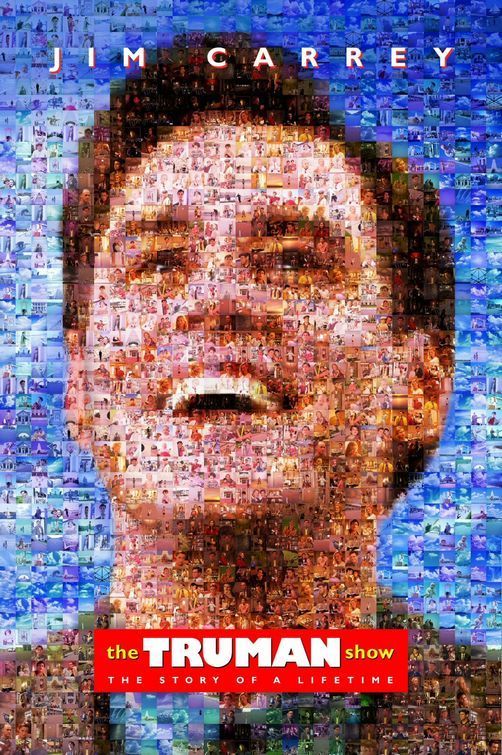 I have a problem with not watching popular movies, and I’m the opposite of FOMO [Fear of missing out]. There are these popular Top 250 IMDB movies and many other listicles which have most of the same movies. It is not that I hate them but I don’t want the experience to be ruined because I’ve got a huge expectation from a movie. A movie is to be experienced without any expectations so that we can have our own perceptions and enjoy the movie the way we want to.

What is The Truman Show movie all about?

The Truman Show is about the life of Truman Burbank. We are introduced to Truman while he is wishing his neighbor and he was shown in fish-eye angle indicating someone is watching him. Each and every move of his is shown in the same angle but before all this, we are introduced to two important people in Truman’s life where they talk about “The Truman Show” and we are left confused about the movies’ proceeding. Slowly, we understand that Truman’s life is being telecasted to many people across the globe, LIVE.

The movie has many allegories, hidden meanings and you can find a number of YouTube videos and articles breaking down the movie. Such is the depth of this movie but I’m writing something different in this blog post. Read on.

Broadly, the movie talks about privacy. Truman Burbank is the representation of people and the company which created the fake reality around Truman and made his life a TV show. This show shed a light on how the Government or a Corporation constantly wants to know more about us and can later use our own data to exploit or threaten us. In a way, this movie showed us how our data can be used. It was interesting to see a production on the value of data before the Black Mirror.

Whatever Truman does, be it drinking a coffee or a beer or even his accessories is product placement in disguise. Most of us are glued to the screens, be it TV or cell phone, or a laptop. We consume a lot of content (including this blog post) which ends up selling something to you.

Every content out there is trying to sell you something, which you may or may not need. These “Black Mirrors” dictate our lifestyle and influence us to purchase their products or services. In the movie, we see product placements — subtle and direct — throughout. At one point, Truman asks Meryl who she is talking to, she was being an ambassador for coffee powder.

In the movie, we are shown two sets of people. While one kind is inside the Hollywood fake town and the other kind is outside it ie., the real world. The director of The Truman Show in the movie, Christof wants the audience to keep binging on it. Through the course of the show, from the birth of Truman until he reaches his 30 years, you get to see different people glued to the TV round-the-clock. They are all invested in his life and actions. Once Truman finds the “Exit” door, people are happy but they do not know what to do after that.

Social media and other OTT platforms are vying for viewership. Unlike the people in the film, who don’t know what to watch other than “The Truman Show”, here we are spoilt for choices. The time spent on any of these platforms gives them the data they need and gives us the entertainment we need. Both parties are happy. However, at what cost are the platforms getting what they want?

The Truman show is a well-written movie that predicted the future and the ever-changing nature of viewers. The movie was released 22 years ago and it still is relevant. Not only does it talk about the exploitation of the government and the corporate does but also gives ideas on the latest gadget design or product placements for the tech giants at present.

Like Truman, we are made to believe that living inside the confines of our comfort is soothing, but we need to take that one step and break the shackles to find the world outside, literally and ideologically. Truman accidentally found a door to break out of his comfort zone and we might find one too. When you do, make sure to take that leap. Don’t get bound by the norms. All we need to look for is “Big Black door” to find what’s out there.

Audiobooks are the rage these days. Most of us started listening to audio content which allows us to do our chores at […]