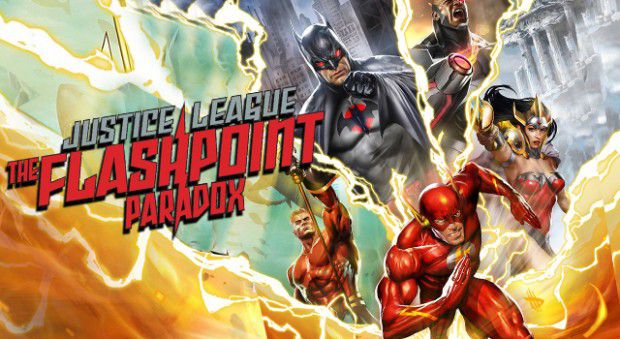 Kicking off a new blog series with this post. In my blog post, at the start of the year, I mentioned writing about the DC Animated Movie Universe (DCAMU) and here we are, after six months into this year.

Whenever DC want to change something in their comics, all they had to do was call flash, or bring flash into the picture. The Flashpoint Paradox is all about flash and a small decision he makes changes the course of the entire universe. The heroes become villains, villains become heroes, heroes and villains work together, and lots of other things happen in this movie. So Flashpoint Paradox, is a crisis event in the DC Universe, and I read the comics, and they have done justice to this animated movie,

The movie starts with Barry Allen, the second most famous Flash after Wally West. Barry wakes up to be found in an entirely different world than his. He is not a Flash here, the world is in chaos. Most important of all his mother is alive, he is confused and we explore this new world along with him, did Barry find what went wrong with the world? How did his mother come back alive? You should see this movie to know more.

Justice League: The Flashpoint Paradox is basically an Elseworlds storyline and also a Crisis event. With this, the course of the entire DC Universe changes and that’s how New 52 comics were born. Some of the familiar characters are slightly twisted in this world, Superman is no more in this world, Aquaman and Wonder Women are fighting and bringing this world down for their egos.

There is very little I could talk about this movie, even the slightest of reveals would spoil the surprise. For a long time, DC fans would have either watched this movie or read the comics but for others, I would like you to experience it on your own. I’ve written about The world of Flashpoint Comics sometime in the past and you can read it here and here.

Do not mess with the timeline is the whole idea of this movie. Barry for his selfishness goes back in time and does something, this causes the chain reaction and the whole world turns upside down. For people who watch ABC’s Flash TV show, the 3rd Season was all about this. The show focused primarily on Barry Allen and his friends in Central City, this event in the comics affects the entirety of the DC Universe.

The idea of writing about DCAMU was to primarily introduce you guys to the world of DC’s Animated Movie Universe. They have been the forerunners with quality Animated shows like Batman: The Animated Series, Superman: The Animated Series. One of the best Batman Movie Batman: Mask of Phantasm and much more. Most of the DC Animated movies are majorly or loosely based out of the Comics much like the Manga – Anime releases.

I hope you enjoyed reading this review and will meet you soon with the second movie in this DC’s Animated Movie Universe where all the 16 movies have a connected story arc. Until then.