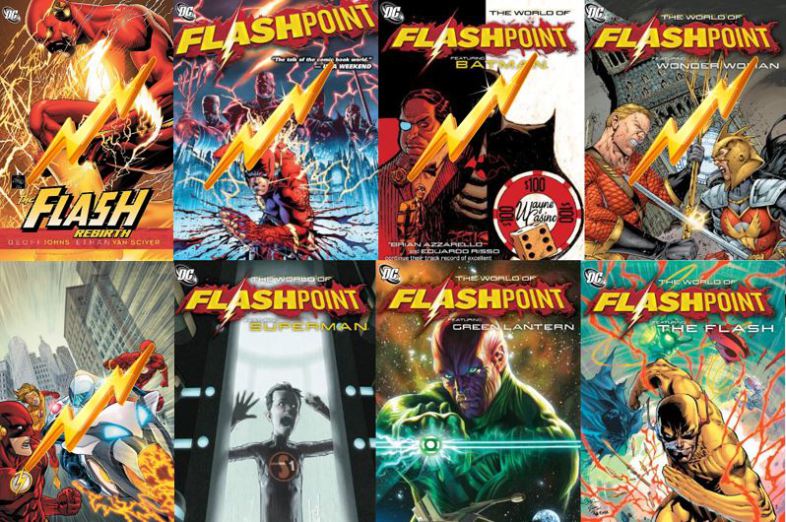 Remember, in my previous post, I have mentioned that, there are 6 TBP’s (Trade Paper Back’s) which comprises this Mini-series to complete a full circle, Now is the time. I have finally completed reading the balance 3 “The World of Flashpoint” mini-series which ultimately connects to the major Flashpoint Storyline.

Umm! Okay, I know people who are not into comics might be scratching their heads. Don’t worry, let me explain things for you in a Flash (See What I did there :P). Alright, The World of Flashpoint Mini-series is all about various things happening across the universe, even in the outer space when the Scarlet Speedster The Flash decided to do something which he couldn’t do (This is the major plot point and I don’t want to ruin that for you). When he went back in time and did something, the entire timeline disrupted because of that one event and as a butterfly effect the World has completely changed. In the previous post, I gave you a glimpse of Barry Allen (The Flash) waking up without realising what he did and tries to understand this universe, The alternate and the darkest version of Batman and then we also saw the causes and the reasons which caused a rift between Aquaman and Wonder Woman. Now, allow me to delve you into other important characters and events which will help The Flash to fix the timestream.

This alternate version of Superman is new except that I have seen him in various Animated Movies and TV shows. I love the way the story takes twists and portrays Superman and his origin differently. The, What if situation about the Superman’s Origin is beautifully handled is what I must say.

The World of Flashpoint part: I liked the way Traci 13’s character is written but the end was more dramatic and sounded like an Indianisation for me where they could have brainstormed more in order to give a more different and interesting ending to her story.

Booster Gold: My first encounter with him in Comics and he is kinda nice the way he is written. I’m also eagerly looking forward to what Booster and The Flash can do to bring things back to normal. On a whole, this TBP is not as bad as I expected but a very decent read.

The TBP starts off with Abin-Sur’s mini-series which gives us a brief on his existence and how he plays a major role in the grand scheme of things. They also deal with the Blackest night event with this mini-series but not on a grand scale.

I somehow liked the Frankenstein and the Creatures of the unknown. The narrative and the characters kept me hooked. Their story starts from World War 2 and how they end up in the current era. This mini-series was really interesting to read.

On the hindsight, we also get Hal Jordon (The Current Green Lantern) who in this world is a Piolet as any other previous worlds. He is as irresponsible as all his other story arcs but one good thing is he does an ultimate sacrifice to prove his worth.

We also get a glimpse of Green Arrow industries where they build a final weapon to end the great war between Atlantians and the Amazonians. This TBP was not great but not bad either.

Flashpoint: The World of Flashpoint featuring The Flash

The last TBP in the Flashpoint Series books. Think I read the series in the wrong order, nevertheless I was able to connect the dots and fill the gaps. In this TBP we are first introduced to the story of Reverse – Flash who is the greatest arch-enemy of The Flash and the story really holds good.

Then we are Introduced to Citizen Cold, not Captain Cold in this universe. Snort being Snort he tries to play a Hero, again Snort has a certain moral compass and he still holds that here, although he does some gruesome things still it is Snort whom we are talking about and that Story is interesting as well.

Legion of Doom comes into the picture and this story revolves majorly around the rift between Heatwave and Cyborg, we also see Plastic Man, Black Manta, Thinker and many others. This mini-series deals with how all of them take their revenge on Cyborg for putting them behind the bars.

Then we see the King Grood who is bored to death for not having anyone to fight or rip their skull out and this storyline doesn’t fit so much into the narrative I guess.

At last, we have Kid Flash who is struck in the 31st Century with Hot Pursuit where Brainiac has occupied the world. Then we see how they pursue to change the past, the usual Flash thing and I wouldn’t want to break your surprises there, Kid Flash reaches the Flash finally and gives his piece of advice, then the story ends here.

On the whole, this TBP is really good compared to the most and I would rate it next to the Batman TBP which I loved the most. For people who would like to read The Flashpoint event with the order of it happening please check this space.

Thus, I end this series with 2 parts and hope with these 2 parts I nudged you enough to start reading Comics. I also understand many wouldn’t know where to start reading comics. I haven’t read Marvel Comics and I cannot recommend you at that end but with regards to DC, they reboot as a whole often which will be a perfect vehicle for many to start with not getting stranded in the middle of nowhere.

With regards to DC, you can start with DC Rebirth which was started in 2016 and still continues. There some major events which took place in the last 2 years one being the Doomsday Clock one of the major events happening and the other one being DC Metal series. Think I am not confusing you with my over-enthusiastic writing here. Do comment if at all you have any questions and I would be glad to answer them. Be warned, I’m as new to this world of Comic books and I’m still learning. Hope, I piqued your interest.