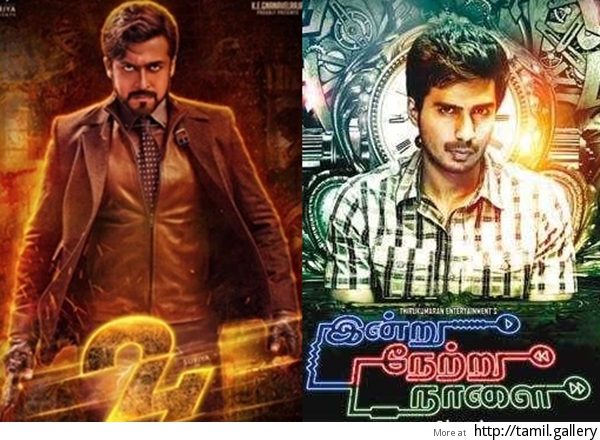 I am a Quora user and I write there on a Daily basis. I came across a Question about comparing 24 and Indru Netru Naalai which are 2 Time Travel Movies which was released very recently and I have shared my views and explained about different Time Travel Paradoxes used in these 2 Movies.

Question: Which is the best Time Travel film in Tamil, 24 or Indru netru Naalai?

Time Travel is really a Vast and Confusing concepts and Time Travel consist of various paradoxes and theories revolving around and to explain the difference between these 2 movies I have to explain What are the paradoxes these two movies have used.

Predestination Paradox and Casual Loop: These two more or less fall under the same category but the cache is with Casual loop it is also called as Butterfly effectwhereas one incident is related to the other. For example if, you remember in Indru netru Naalai remember a scene where Karuna tries to find the badge of a Retired Army man and when they travel back in time he releases a Dog which stands on that badge and barks at him with which that Villain is saved. If, the Dog was not released Villain would have died thus one event is related to the other which is Casual Loop or Butterfly effect.

With regards to Predestination paradox a person Travel back in time (Which is Past) and until and unless their presence is not there the particular sequence or Incident wouldn’t take place and again let me take an example of the same Indru netru Naalaimovie where Partha (Scientist) will get affected by the Shock and when Karuna and Vishnu tries to travel back in time and save him they will realise his plan and leave him to die. Without karuna and Vishnu’s presence in that sequence Partha wouldn’t have got a shock. Its pretty confusing right?

So, Indru Netru Naalai is basically taken with the concept of Predestination paradox and Casual Loop which are closely related and in this concept there are high chances that The person from the future and present both have a high chance of meeting which would change the course of action. Again Temporal Paradox also has a small part in it.

Hitler’s Murder Paradox or Grandfather Paradox: Both these concepts fall underTemporal paradox. Let me explain this Let us say a person travels back in time and Kills Hitler when he started to emerge as a leader so, that WW2 wouldn’t have happened. With regards to Grandfather paradox say you travel back in time and kill your Grandfather while he is young hence you prevent him from giving birth to your dad and there are no chance that you would have born and How did you kill your Grandfather? Again quite confusing theory this is.

Just keep this idea floating not literally but technically. You travel back in time to change a certain event or stop an event ultimately you end up with a different Incident happen altogether, Let, me explain it with the sequences from 24 movie. In a scene where Samantha tries to repair her Watch and end up looting Suriya’s work and time stating that he broke the watch. Suriya travels back in time and finds the fact that the watch was already broken and prevent himself from being looted. This is just an example.

Apart from this Temporal paradox theory in 24 movie they created an Idea of Time Freeze which again is entirely a different idea and you know What it is? In 24 Movie they also have a different concept where the Time Traveller travels back in time they fall into the Time Loop concept where they learn about the incident better and re-lives that Incident. If, you remember Edge of Tomorrow movie you will understand the Time loop concept. Instead of the the Time Traveller meeting his Present or Future form he goes back to the original form where all it started with knowing the Incident better.

So, except for the matter of Time Travel these two movies fall under a different concept or Paradoxes altogether.

IMHO comparing two movies of same genre with different concepts isn’t fair and that too Production value, Actor’s brand Image and others also play a Vital part when comparing a Movie. I wouldn’t say one is better than the other but both these movies are Unique in its own way.

You might wonder why did I explain about the Time Travel Paradoxes instead of telling it in a simple way? I thought it would be an eye opener for us because Time Travel concept in Movies is totally a New idea in Tamil Film Industry and it would be an education for us before we compare two totally different movies with different concepts.

P.S: The ideas and concepts I’ve presented are in my own understanding and it is purely my opinion. Please refrain from illogical and rude comments.