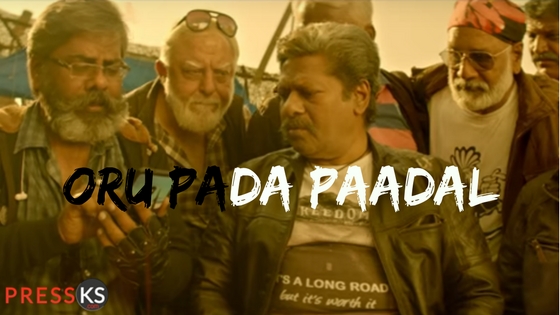 This post has been written by a good Friend Gopalakrishnan Krishnasamy. In the blogger’s circle, he is known as Prabala Padhivar Gopal and he blogs at Movie Herald. You can watch out for his Movie reviews here.

Sean Roldan started as an Indie musician with his own band then Ventured into Tamil Film Industry with Vaayai Moodi Pesavum directed by Balaji Mohan. Later on, he also composed for movies like Sadhuranga Vettai, Mundasupatti, Joker and few more to his credit. Pa. Pandi put him in limelight as a musician apart from him singing for other music directors.

Pa Paandi is a drama movie written and directed by Dhanush Kasthuriraja. The movie stars Raj Kiran and Revathy in the lead along with Dhanush, Prasanna, Chaya Singh and Madonna Sebastian. The score and songs of the movie are composed by Sean Roldan. This is one of the finest albums of the composer who made waves with his indie compositions.

I chose this movie in the series majorly for one reason as the songs were aptly integrated into the movie and each song conveys a different mood. The brilliance of the composer and director is naming the song in perfect sync with the emotion and story it conveys through the same. This album came as a sea breeze at a time when the complexity of the tunes and music is highly praised. This whole album is with minimal programming and many live instruments played. The lyrics are well crafted and given importance to singing more than music. You will get a feel of listening to a retro Illayaraja album.

The Life of Power Paandi – Vaanam

As the name suggests this song is about the day to day life of our protagonist Power Paandi. This shows his happiness, his world and how he enjoys the life. The soothing composition is sung by Ananthu who is known for singing Maaya Nadhi from Kabali and is written by Selvaraghavan.

This song is a typical hero worship song which we have been seeing for a long time in Tamil Cinema but here it is rejoicing of an Old man who after a long time had a chance to stretch his muscles. This song expresses the joy of an old man who entered his forte after a long long time. The song is written and sung by Dhanush himself.

This is a love song showcasing the lover of younger Power Paandi. Dhanush plays the role of younger power paandi carries the role with ease. The song is crooned by Sean Roldan and Shwetha Mohan and written by Selvaraghavan. This particular song is my pick of the album.

This song shows the trip of Power Paandi. The cruiser bike in a highway and guitar riffs are always better than any other love. Bikers will enjoy the picturization and the rustic voice of Sean Roldan and Anthony Dasan. The song is written by Raju Murugan.

Three versions of the song are available on the album. One sung by Sean Roldan another by Shwetha Mohan. After the release of the album due to fan’s request, there is a version sung by Dhanush was released. The song was penned by Dhanush and portrays the core theme of Old age love is beautiful manner.