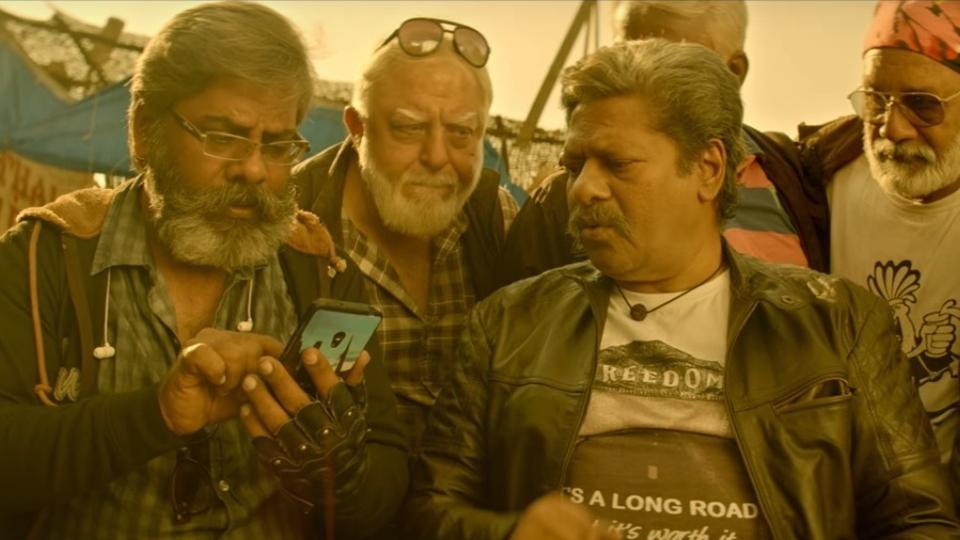 We all have fond memories of our Grandparents and How many times have we seen them have a life apart from their grandchildren or their children? Have we ever given a thought about our retired parents who can’t sit home idle but meet their friends, go on a trip etc.,

Heck! How many times have we mocked that uncle who is in his 60’s for attending a French class? Haven’t we mocked that aunty in her 50+ who wore so much makeup? We are indoctrinated that people who have crossed their 60’s are bound to stay home and rest, they are supposed to rejoice the life they lived in an easy chair but nothing more than that. One dialogue in a movie where Paandi asks Poondhendral “naama namma pasangalayum pera kuzhandhaingalayum pathi nenaikkurom, avanga nammala pathi nenaikkuraangala?” How true those words are?

Power Paandi exactly takes this idea and this time we have a hero who is in his 60’s. When he was forced to live inside the walls and pushed not to poke his nose. He leaves his house not to be a burden to his son (Prasanna) and daughter-in-law (Chaya Singh). Where did he go and who did he meet is the rest of the breezy movie. As Paandi we also feel like living inside a cage in the first part of the movie.

Dhanush with his directional debut chose to stay safe on the plot and screenplay. Surprisingly he did a great job as a director except that the first half of the movie have few flaws and the Screenplay was dragging. The second half took a U-turn and was on a top gear with some beautiful moments.

I couldn’t imagine any other person who could have done justice to this role apart from Rajkiran who did an exceptional job as a loving Grandpa, silent father, cheerful lover. There is a scene in the movie where he would tug under the bedsheet and wait for a response from Revathi. It brought a smile on my face because we see such habits among youngsters but not from an old man.

When Revathi entered the Screen the whole movie got a new air. The romance was blistering through the scenes she appeared. Wish she got, even more, screen space. Sean Roldan did a fantastic job with regards to the background score. In the flashback scenes which takes place in late 70’s, he gave a slight touch of Illayaraja. Way to go Sean, Way to go.

Even though the movie had a slightly draggy first half with few flaws, the second half of the movie really makes us forget all those flaws and we also ride with Paandi along with him. Paandi’s grandchildren are adorable and the pakkathu veetu guy guarantees for some of the timing comedy portions in the movie.

It is a rarity these days to see such movies on screen and even if, we see they mostly have a depressing climax but fortunately this one doesn’t and that’s a reason this movie stands out. Dhanush scores his brownie points as a director. Don’t ignore your parent’s and they also have a life even after they are retired is the message of this movie, they also could go in search of their lost love all we need to do is let them be. Go watch this movie with your parents and I’m sure they would love it.