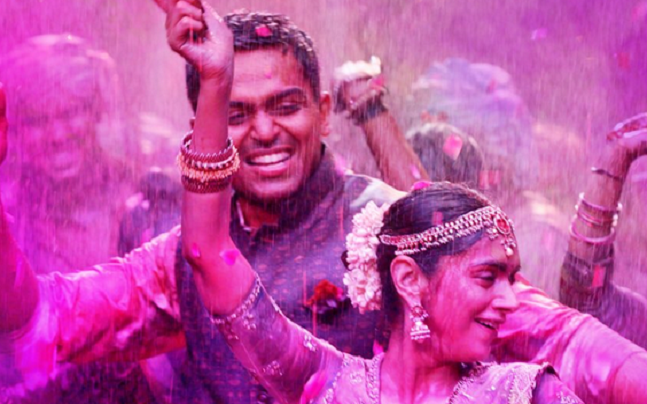 Kaatru Veliyidai kannama – This is the first line of a poem written by Mahakavi Bharatiyar. A man who wrote about Pudhumai Penn and also about How a Woman should stand up for her rights and raise her voice against being oppressed. The title of the Movie is from a poem about a man who writes a poem about missing his girl.

When the posters came out it seemed like a movie in War setup and comparing it with the title and the poem one would assume Roja kinda movie, but when you enter the theatre Mani gives you a twist and the movie is about an abusive relationship. While the movie flows you get a feel that the movie is a mix of Mani’s previous ventures with the likes of Roja – Where the hero is captured by the terrorist and here he was captured by Pakistani’s and both are patriotic to their Nations. Alaipayudhe – Where the hero goes in search of his doctor girlfriend in a song. Alas, I understood the movie is a bigger view of the love life of Inbasekar – Sasi relationship from Aayudha Ezhuthu except that Sasi leaves Inba but Leela doesn’t.

When a narcissist and chauvinist guy falls in love with a girl who expects equality in a relationship is a fresh idea. I liked the movie for this and Mani always brings in some controversial ideas into his movies. He made the lead to marry a widow with a kid in Thalapathy. His OK Kanmani was all about live-in and in this movie he presented pre-marital pregnancy in a positive way.

Though I liked the movie I couldn’t agree with the climax because when he portrays a girl who expects fairness in a relationship and of course she was absolutely fine with being pregnant, which I would consider broad-minded wouldn’t want to stay in an abusive relationship. Not even a normal girl in her right mind would bear those insults and physical abuse. In a way, the movie glorifies abusive relationship and I seriously doubt if the hero really evolved as a human.

Mani as usual plays with his layers of messages throughout the film. In Nalla allai he made VC stand on his Jeep but Leela on the ground implied that VC will still be above her. When Leela tells VC that she loves him but a barrier between them indicating the states of their minds. I am sure many would have noticed the confrontation scene where VC and Leela were facing each other in the different directions as their decisions to keep the baby or not.

ARR always save some great numbers for Mani. Songs already were the chartbusters he scores one’s heart with Juguni during the flight travel to the Himalayas. His music adds colour to Sarratu vandiyile. Though I loved Azhagiye because of its comical proposal tone and of course Aditi was playful throughout the song and was even more beautiful with her cute face expressions.

Another reason to enjoy the movie is Ravi Varman, the DOP for the movie. He flabbergasted me with those long shots of Thar, close up shots of Aditi in the beautiful Srinagar, colourful picturization of Sarattu vandiyile song. I’m unsure if the mirror shots of his is a unique touch he gives, which he placed across the movie in various scenes. Even if, one doesn’t like the movie they might for its picturesque experience.

VC as a Character is manipulative, cocky, who enjoys inflicting pain to his partner. His cockiness is showcased with his Rayban glasses throughout the movie, wherever he acts one. I wish Mani could have avoided close-up shots of Karthi, he literally made me jump on my feet panicked with those close-up shots. I feel he did his role ok. Aditi Rao Hydri, on the other hand, was the show stealer she did her part really well including the proper lip sync and all. Fortunately, we didn’t hear the noisy banter of RJ Balaji and he was really unnecessary in the movie. Many other actors were underused and they really didn’t have a role to play in the movie.

I think it’s high time Mani focuses more on the Story-telling part and he should also move away from his Love genre for a while with his series of flops. Still, we love you Mani sir for the great movies you gave us for the lifetime. We are definitely a bit disappointed but we are confident enough to see you back on the action.