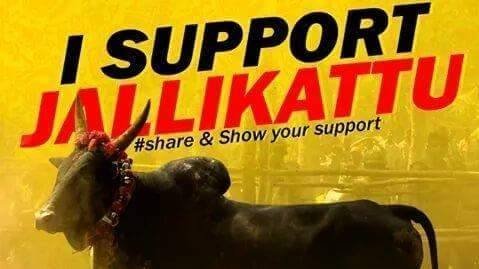 Jallikattu. Everywhere in Tamilnadu from the past week we hear this. Yes, only for the past week and somehow only before the Pongal week everyone shows interest in Jallikattu and rest of the days they were worried about trolling some Celebrity or Watch Jodi.No.1 and Nagini in TV’s (Engerndhuda thideer paasam varudhu ungalukku😡 ).

I wish to just stick to the Politics behind the ban but a little education is required for many because, You know, we just follow the trend without questioning or reasoning and the same follows in the case of Jallikattu. Herd Mentality. (As far as I’ve seen).

In Tamil we call it Eru Thazhuvudhal (ஏறுதழுவல்) which is loosely translated to embracing the bull which is a sport celebrated on the Maatu Pongal day (A special day to thank Bulls and cows, because they were used in farming activities). This is What Jallikattu is all about in short. In every Village Jallikattu bulls are trained from their adolescence. Feeding and maintaining a bull for Jallikattu isn’t a joke. People spend more on the bulls for them to be strong and Nutritious. Bulls are brought from various villages around the host village.

How is the Jallikattu Sport conducted?

As far as I’ve known and seen, before the sport starts both bulls and the players will have to take a test. Bulls will be tested on various parameters to make sure they aren’t injured and with regards to players they will be tested by Government Vets if, they are drunk or not and basically no player carries any weapons because then they are considered to be a coward if, they do and they respect their bulls.

Once these tests are done the bulls will be let out one by one. Vadivaasal is the only varient happens in Jallikattu. Vaadivaasal is nothing but when the bulls come out of the tent, players should embrace the bulls hump and travel until the predetermined end point. If, a Player succeeds in doing that he will be awarded with some cash prize and if, the Player fails ,the bull owner will receive Cash Prize.

Once again the players and the bulls will be gone through a test to make sure they come out of the field without any injuries or not.

After the Jallikattu event bulls which won the prize or in other words the bulls which didn’t let the players to embrace them until the predetermined end point will be used for mating purposes because these bull’s gene will produce more nutritious bulls or cows.

The bulls which lose will be taken to their respective owners homes and they will be trained again. After certain attempts the owners choose to keep it or they are sold in Maatu Santhai (Well, now don’t come calling it illegal).

Ban and the Politics:

In 2010 Supreme Court allowed Jallikattu to take place infront of District collector, Sub-Inspector of Police of that area and Government Vets. Later, PETA India and Animal Welfare Board of India again protested stating that Jallikattu isn’t happening according to the norms of Supreme Court which was issued. They also produced a Video footage and claimed that was shot on the day of Jallikattu. After Supreme Court’s announcement the officials had made sure to paint the horns of the bulls with a JK number (More like a Jersey number worn by a Sports person) and those video footage by PETA doesn’t have those JK numbers on bulls horns. Well, I suspect that video should have been staged.

In the year 2011, Ministry of Environment and Forest banned the use of bulls as performing animals. I doubt when did a bull become a Wild Animal? Isn’t it a domestic animal? Even so, why only bulls? When did Elephant become domestic animal? Why not ban elephant from using it in Temples and in festivals?

I infer from all these above mentioned incidents that PETA plays a very big role in bringing down Jallikattu. I understand they are a group of Vegan funded by umm! unkown sources who have shit load of money to recruit Top paid lawyers of our Country and conduct the case in Supreme Court.

I personally tried to comment on the PETA’s Facebook page defending Jallikattu and they share just one video for the past 6 years and they really have no other evidence to show and these are the guys who didn’t give a damn about Spanish bull fight and the cruelty done to bulls there (Refer video) and if, you see that clearly the bulls are attacked and the blood is oozing out of the bulls and PETA another claim is loss of human lives don’t these Spanish bullfights cause Human losses? Why didn’t they go fight and stop them?

They didn’t stop Spanish bullfights because they are least bothered about bulls or Animals in general but they would like to decimate the proportion of Indian bull breeds especially, and as a chain reaction Indian cattle breed would vanish, exoctice breeds like Jersey, Holstein and some more genetically mutated bulls will be imported which are rich in fat and also has the capacity to induce diabetics. Already these days we see diabetics in kids and most of the packaged milks are from these exoctic breeds of cattle, because they produce close to 40 liters of Milk a day (Day adhu maada illa tanker lorry ah daaw) and Dairy Industry is flourishing. Indian native cattle breeds produce A2 milk and these exoctic breeds produce A1 Milk (http://food.ndtv.com/food-drinks/a1-versus-a2-milk-does-it-matter-1414225) take sone time to understand this because Native Indian and African cattle breeds are the ones which produce A2 Milk.

Also, PETA is dirty enough to cover their faces. Check this Link where PETA secretly slaughtered kittens and pups in the name of shelter house in US. When I shared this on their FB page the response I got was “This incident happened in US and PETA India is an individual Organization”, pfft! How lame?

Jallikattu is part of Tamil tradition and many who doesn’t care to understand it call it a barbaric sport and many used to ignore and tag it as an uncivilised sport, even explained they are in an agenda to not listen. Apart from being a traditional sport Jallikattu also plays a major role in saving native Indian bulls especially the breeds of Tamilnadu like Kangeyam, Umbalamchery, Bargur, Pulikulam. We support Jallikattu and preserve of native cattle breeds.

Audiobooks are the rage these days. Most of us started listening to audio content which allows us to do our chores at […]

I hope every individual forgot this issue. Politicians and Media were debating seriously on this Topic for months and now we don’t […]


Brilliant Article. Write more on this topic and we would love to hear more from you Sir.


Thank you Varun… Sure, I’l do my share of research and write more on this


A very well explained article. I hope you like my article on same topic http://wp.me/s8g2rs-103


Thank you.. Will definitely read it