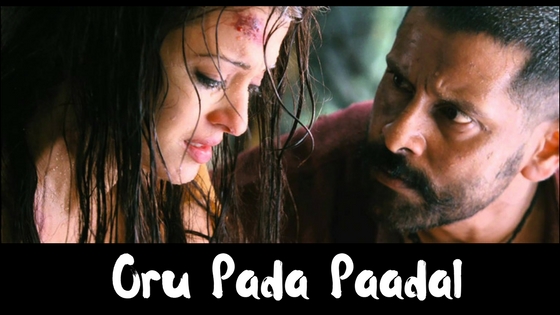 A guest post by my Good friend Megha who blogs here. She is the one who inspired me to Write this series and she suggested me this album. I thought it would be great if, she herself writes it and hence, she did. Thanks a tonne Megha 🙂

This song can be easily said to be a masterpiece. This has brought out the best of all the three people involved in it- The composer, the lyricist and the singer.

Appearing to be a self-justification given by the lead (Veera) for falling for Ragini, who is another man’s wife, this song starts with sounds. Erratic cymbals, crumbling dried leaves, the sound of waterfalls and the sound of wading through a pool of water find a place in the starting of the song. The intensity of the song is like the wild forest fire which starts with a spark and grows slowly and ends up in a fearsome blaze.

Vairamuthu has re-emphasised why he is put up there, on a high pedestal, when it comes to lyrics. My favourite lines are these-

This line begins to describe the dilemma that Veera, the lead character, also perceived to be Raavanan ( Ramayana context) about what is acceptable and what is not in the social parlance. This line also says that the feeling he had for Ragini was lost since it was mainly concerned with the body and not with the mind.

Karthik’s voice romances with all possible ranges within the given pitch and the flow is impeccable and effortless. Total class!

The element of air and the eerie silence builds the base for this song. This song describes the earthy beauty of Sita (Ragini) and how Raavanan fell for her beauty.

With the legendary Shankar Mahadevan and an equally talented Anooradha Sriram giving voices to the beautiful words of Vairamuthu, this song predominantly hovers in the high pitch.

To give words to the beauty of a lady is not new. But the way it is done with such language and choice of words does make this number unique and novel.

My favourite lines in this song would be-

When the lady with her hair tied up beautifully with ornaments lied down, the entire world went missing.
On seeing her flawless face ( also an expression that implies not devoured by amorous activities ) the vast expanse of skies sigh out in jealousy.

Most Mani Ratnam movies have a wedding song. We remember Yaaro Yarodi from Alaipayuthey, Kummi adi Kummi adi from Sillunu Oru Kadhal and more recently Sarattu vandiyil from Kaatru veliyidai. Keda Keda is one such wedding song which has rustic Tamil lyrics and sounds.

Weddings are chaotic. Dancing in total sync with super coordinated lyrics and stuff happens only in movies we say. This song supports our view that weddings are chaotic. With various scenes and voices playing around, ARR has done a great job in painting a close-to-reality picture about weddings.

Among the many voices that sung the song, Benny Dayal’s and Rayhanah’s stand out and sets the flavour for the song.

And of course, this is also one of my picks from this movie. So when I get to have my pick in songs, why not my lines from the pick??

Roughly translating to – She is as demure as Sita outwardly, yet as wild as Soorpanakha (Ravana’s sister) in bed.

This is yet another pointer that says villages had procreating as one of the major goals of marriages and they were unabashed in expressing it. This also gives us a glimpse into the lives in the backbone of India, where our age-old traditions and customs stay untouched till date.

This song is about an uprising. A revolution. A revolution against the ruling class.  The song goes along the lines of revolting and rebelling against the written rules of the land and how unfair they are to the lower class of people.

In the movie, this song is placed at a strategic point. Ragini gets to see Veera in a more lively avatar and maybe she starts to understand his point of view. Maybe this is where she starts to feel sympathetic to his cause for the fight, for the abduction of another man’s wife. Ragini sees a Veera, who is a lovable leader of his group of people.  She sees a Veera who is the darling of his subjects, who would give their life for Veera.

Somehow in many places, this song reminds me of the tunes in the movie “Ayudha Ezhuthu” also from Mani Ratnam. The song “Yaakai Thiri” has a striking resemblance to this number and both are set in a very similar stage in their respective stories.

This song is peaceful and deep. Placed in the climax of the movie, this song actually seems like Ragini is haunted with the memories of her time with Veera. A tabooed topic, she still harbours feelings for her abductor. If her feelings were out of love or sympathy, my guess is as good as yours.

The above video supports my view about this song. With scenes from her life in the woods interspersed by the silhouette of the composer, it is a pleasurable watch. If you are thinking that you have heard this tune somewhere else, look nowhere else but Anbe Sivam. The title song of Anbe Sivam has its starting very similar to the notes of this number.

A typical title song, Veera Veera is fast-paced with wonderful chorus supporting the lead vocals. The entire song has a tribal tone to it and is peppy. A bonfire song and a happy number- that would be my description for this one.

The sound of hand claps and short, fast beats make this tap-dance worthy. A must listen number if you want to get your mood up to party mode.

A much-hyped song, this number has a feeling of gentle swaying to it. Something like rocking a craddle.  This is one such song, which is typical of ARR songs. You don’t like it immediately but definitely after listening multiple times. The structure of the song is unconventional and hence might be difficult to reproduce with perfection.

I am not a big fan of this song personally, because I like earthy tones and I find Shreya Ghoshal’s voice too sweet for my liking. Well, I am a Sunidhi Chauhan kinda person I think.

My favorite lines from this song –

A rough translation of this would be –

My unaware, innocent eyes won’t sleep, thinking of you
My beloved, my lord, would you read my mind and grant me that?

This song describes the love between Ragini and her husband. This was may be shown to convey how good a couple they were and how much in love Ragini was with her husband.

To me, Kalvare sounds like a lullaby, a very good one at that.