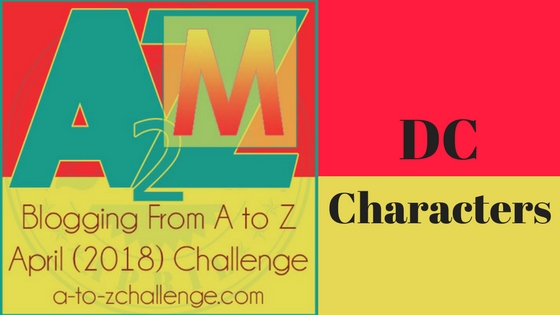 Seems DC has so many underrated Superheroes whose name starts with M. Unable to leave any since all these Characters are nearly unavoidable, I’ve asked my friends on Facebook, few WhatsApp groups and my Whatsapp story. Initially, I thought of writing about all but I decided to write the ones which people asked for. Here, I present you few of the characters from the list.

J’onn J’onzz aka Martian Manhunter, the name itself represents his origin. J’onn is from Mars who was a peacekeeper on his planet. He was accidentally teleported to Earth by a Scientist. Seeing J’onn the Scientist died of Heart attack. From then on J’onn used his ability of Shapeshifting to live among the humans and serve the needy. There are various other origin stories of this amazingly powerful and underrated Superhero but let’s stick to his Golden Age origin.

Some of his powers and abilities include Superhuman strength, well he can fight toe to toe with Superman and there was an instance where he took down the whole Justice League on his own that explains all. His shapeshifting ability, Telepathy (He is considered to be a powerful telepath on Earth, flight, Invulnerability, X-ray vision, Martian vision and much more.

Young Justice Cartoon – This should give you a fair idea about him and his powers.

M’gann M’orzz aka Miss Martian belongs to the race of White Martians who are generally known for being evil but M’gann wanted to seek redemption for her entire race and prove that White Martians can be good too. She became the part of Teen Titans and told them a different story. Using her Shapeshifting abilities and respect for J’onn she maintained the Green colour skin. According to the Young Justice, Cartoon J’onn knows about the true origin of M’gann and let her be in the team and prove her worthiness.

Some of her powers and abilities include Super strength, super speed (She can fly incredibly fast), Mind control, invisibility (Just like her uncle J’onn), size alteration, X-ray vision and much more. She is one of the strongest female characters in the DC Universe.

Some reading and Watching Recommendations:

Young Justice Season 1 & 2 TV Show – A must watch, it is totally fun and you will be yearning for more but Season 3 is up on the cards, we will have to wait until its release.
Teen Titans, Volume III, 37 – Gosh I’m unable to find the Goodreads link, but attaching the DC Wiki link. This is the issue where Miss Martian was introduced.

Michael Holt is the 3rd smartest man on Earth. Michale Holt aka Mr Terrific has an immeasurable IQ, he is not just smart and gifted but he is extremely special. He learned about Theory of Time and space continuum, also read the works of the Scientists around the world, all when he was just 6. He went on to earn 14 Doctorates and also a Polymath (That is extremely knowledgeable in various fields). He is also a CEO of his own company – Holt Industries.

Michael is extremely intelligent who invented T- Mask which allows him to be invisible from Technology. He also invented T-Spheres, floating robotic spheres which can do multiple functionalities each like projecting the Holographic image, Projecting laser grids, serves as cameras, open electronic locks, allows him to fly and much more. Apart from that, he is a Child Prodigy, Athlete, Martial artist, Multi-linguist and a master strategist.

Some reading and watching recommendations:

Justice League Unlimited – Mr Terrific was a recurring character in this series but you can get a glimpse of his abilities.
Mister Terrific was written by Eric Wallace – This is his solo series which lasted 8 Episodes, which should give you a head start from knowing Mr Terrific.

Mister Miracle, the son of Highfather (Who is the leader of New Gods and the ruler of New Genesis). He and Orion (About whom we will discuss in another Blog post), were exchanged as a peace treaty between New Gods and Apokalypse. The nameless boy will be tried to corrupt in the Granny Goodness orphanage (Which is majorly a Brainwash centre to work for Darkseid) where nothing broke the boy.

Later, he would try and escape the Orphanage which would give him the courage to become the World’s greatest escape artist. Initially, named Scott free himself. Later when he joined the circus he will take the mantle of Mister Miracle, when the previous Circus escape artist was murdered. Since Scott Free is the son of Highfather and comes from New genesis he possesses some natural powers like Immortality, Superhuman Strength, speed, stamina, Intellect, agility, reflexes, Energy manipulation, Ressurection, Healing, Space-Time migration, dimensional travel and much more. He is a Master escape artist, Expert combatant and genius intellect.

Max, the first ever human to become a Speedster also the first person to tap into the Speed Force (An energy source in DC Universe generated by Barry Allen which allows speedsters to run faster and do many other things which physics can’t explain :P)

Max was the messenger from the American Fort and in 1838 the Blackfoot Clan was attacked, when Max reached to his friend in the clan, he invoked ancient magic onto Max giving him to run faster. Max was always curious to know about its origin even though the speed was invoked through magic he always believed something else is there (Speed Force), whenever he tries and taps into speed force he is taken to the future. Thus Max Mercury has so many different names in different timelines and in our era he is what we call Max Mercury.

Max retired from the Superhero scene but during one of the fights with The Reverse Flash, Wally couldn’t beat him and Jay Garrick (The First Flash in DC), asks Max for help and thus Max finds his destiny and mentors Wally West’s Flash and then trains Bart Allen (Barry’s Grandson) to use his powers wisely and also to be a normal human. Max posses all the powers as other Speedsters and he is called as the Zen master of Speed since he is an expert in Speedforce and a great teacher for all speedsters starting from Jay Garrick.

Impulse – Runs in the family by Mark Waid – This gives you a glimpse of Bart Allen and Max Mercury as a Mentor. You can read all Impulse series which will give you a great idea about Max and his mentorship.

Lar Grand, from the Planet Daxam. When a pod crashed in Smallville a boy appeared from that and spoke Krypotnian which allowed the young Clark to assume him as a Kryptonian and Clark named him Mon-El (Well, he landed in Earth on Monday Lol!).

When Kryptonite was exposed Clark suffered but Mon-El. Clark though Mon-El is deliberately trying to be a Kryptonite. He creates a fake Kryptonite meteorite made of lead. When exposed Mon-El suffers and also he regains his memory. Mon-El explains Sups, that he is from the Plante Daxam and unlike Krypton poisoning, Daxam poisoning cannot be reversed. Superboy puts Mon-El into a Phantom Zone (Created by Superman’s father) until a cure was identified.

Superman couldn’t find a cure but in the 30th Century, the Legion of Superheroes release Mon-El. Saturn Girl (About whom we will see in another Blog post) created an antidote serum which will allow Mon-El to be released from the zone which is temporary. Brainiac 5 would go on and create a permanent antidote which will cure Mon-El and he will be accepted as one of the Legionnaires. Some of his powers include Energy Projection, Energy constructs, Matter manipulation, Flight, Recharging, Electromagnetic scanning, Pocket dimension and much more.