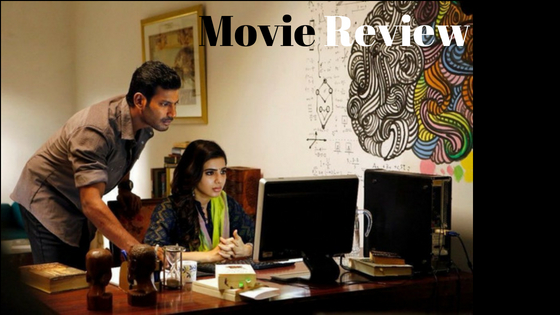 Spoilers ahead, Read at your own risk 😛

It has been so long that I’ve written a Movie Review. We don’t come across a thoughtful and a perfect commercial cinema in Tamil and these days it has become rare to find one such movie that too from a debutant Director.

Irumbu Thirai as a movie works for me at various levels starting from Samantha as Dr. Rathi Devi, her role as a supporting heroine but not as a loosuponnu, Arjun as White Devil the terrifying Villian with very limited screen presence (Many compared him with Siddharth Abimanyu of Thani Oruvan but philosophically they both are different), Vishal as a protagonist but not as a hero and Delhi Ganesh’s performance as a Dad. The movie is written well on paper and executed even better on screen.

P.S. Mithran as a debut director grabs attention with his meticulous detailing with regards to technology and technical terms used, his dialogues were not forced but was on point and sharp. Even though Robo Shankar comes throughout the movie, his comedy was not irritating but rib-tickling at moments. Comedy track didn’t seem forced but came naturally, same with the love portions. It’s been so long to see the leads fall in love naturally rather than being forced.

The movie naturally started flowing into the story, in the first act and it set a perfect stage, although we might feel the movie starts only after the conflict. I couldn’t stop noticing that many actually felt the movie actually started after the first half but it was not the hero who seems to be uninterested in his family, later gets caught in an issue because of his family. He meets the Doctor who helps him out of his anger issues, later she plays a key role in motivating him to understand his enemy. In Major Kathiravan we don’t see a hero but a protagonist, who is vulnerable and constantly learns frrom his enemy to beat him.

After Sandakozhi, I felt Vishal was a perfect fit in the action sequences, thanks to Dhileep Subburayan for doing the action choreography well. Yuvan’s background music adds a boost to the movie but over a period the theme for Vishal was repetitive. George. C. Williams’s camera takes us amidst the crowded streets and doesn’t shake much during the fight scenes, the shots at night were beautiful.

I must definitely mention about our antagonist here, White Devil, who holds the kingpin ID of Darknet. The reason for Arjun’s limited screen presence was intentional I guess, owing to his character’s anonymity. We never know who wages cyber warfare among the greedy individuals. I see White Devil as an extended version of Gandhi Babu from Sathuranga Vettai, The only difference is Gandhi babu directly loots money from the victims with his schemes but White Devil appoints someone, but both of them instigate greed or they think so. Among the various takeaway’s from the movie, the major takeaway for me is perspective.

White Devil considers himself to be a Robin Hood if you notice he claims that he looted money from people who cheated the bank or Government on various points, but on the hindsight, it was different. Major Kathiravn’s, on the other hand, had genuine reasons, as most of White Devil’s victims were, they were cheating just so that their work can be done but cheating isn’t the lesson. I would like to quote Amish Tripathi from the Immortals of Meluha which sums up my thoughts “There is your truth and there is my truth. As for the universal truth, it does not exist“.

Irumbu Thirai is definitely a Welcome change in Vishal’s career and a good start for P.S. Mithran as a director in Tamil Cinema. As an ardent Cinephile, I welcome you with a bouquet sir. 🙂