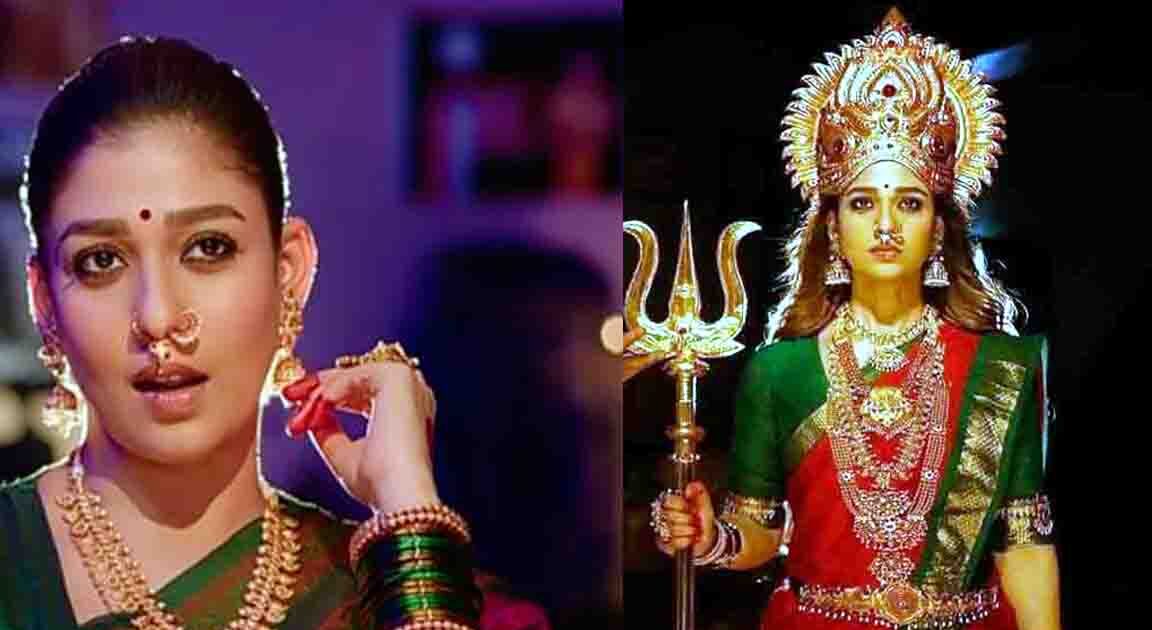 Amman movies have always been about Good Vs Evil and they come with some nostalgic values to people like me who grew up watching various Amman movies while growing up. I’ve seen people dance in theatres out of extreme joy or devotion of seeing a deity on screen, from then on these Amman movies have been templated in telling the same rehashed stories. With RJ Balaji venturing in taking Mookuthi Amman add any value?

Engles Ramasamy (RJ Balaji) works as a reporter in a small-time TV channel near Nagarcoil. He lives with his mother Paalthangam (Urvashi), his paternal Grandfather (Moulee), and three sisters. He is unfortunate in finding a girl to get married to due to his familial circumstances; his mother also wanted to visit Tirupati for a very long time. Every time when they embark on a journey to Tirupati something or the other happens to stop the journey. An elderly woman suggests them to visit their family deity’s temple (குலதெய்வம் கோவில்) to rectify any mistakes and help them embark on the journey to Tirupati. When the family stays in the temple Mookuthi Amman (Nayanthara) appears infront of Engles and what happens next forms the crux of the movie.

Movies that talk about the Hindu Gods are a sensitive topic in India, especially now more than ever. If the movie gives any hint of the wrong message they will have to face the wrath of political parties that holds Hinduism and Hindutva agenda. In that sense, the movie played a safe game; even though the movie’s prime focus is questioning the authenticity of the Hindu Godmen, the director also didn’t fail to take a dig into people who constantly question and mocks Hinduism as religion & its regressive practices.

Well, the dig at Dravidar Kazhagam (DK Party) is rather an untasteful attempt because the understanding of RJ Balaji’s is rather poor than informed. It is okay to question the selective questioning of religions by these parties but the way I perceived that part of the movie is as if DK is okay with other religions and not Hinduism. This is rather a broad topic, which for another day and I wish the writer/director bothered to atleast understand the philosophy of the DK party before taking a vague dig.

Nayanthara and Urvashi were the biggest strengths of this movie, Nayanthara as Mookuthi Amman has a magnificent presence throughout the movie. Portraying the gods as someone with humor sense is rather refreshing while interacting with humans. Urvashi on the other handheld the movie tight with her comical timings and emotional beats gracefully, be it when she is over-enthusiastic or when she is emotional we fell her. The women in the movie are written really well which played to their strengths and RJ Balaji is getting better at his acting and less annoying.

When someone like RJ Balaji has set a benchmark with his previous movie we tend to go with the same expectation but only to be disappointed a bit. The movie definitely has varied opinions but when the movie inched towards the second-half it was an easy guess because the trailer had it all and I could foresee how the movie would end. I also loved how the movie asks “If the god exists or did humans create?” that would have been an interesting premise in itself if explored more. Maybe we expected a little bit more, I wouldn’t say the movie is bad or great, it is okay and could have been better with the writing. We expected a satire movie but RJ Balaji gave us a typical Amman movie with a message.


Great review. Honestly want to see Balaji venture further into performances that demands more acting than speaking. I totally disagree that he was less annoying in this film, though he has done very well in few other scenes on the film, having his name added to as a director has only spurred him on to go further into his trademark babble-talk, which hit an all-time peak with all the needless clamoring.


Thank you and thinking about all his unwanted blabbering in the movie I kinda agree with you but I also feel it has kinda reduced or say that blabbering was undercut with his performance.