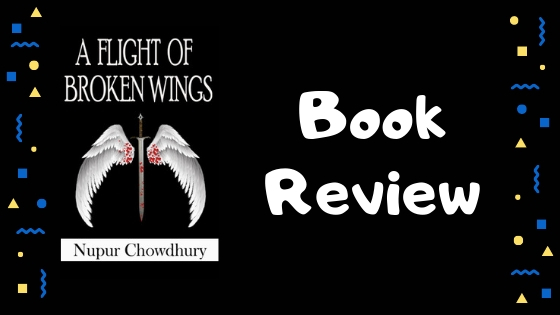 A Flight of Broken wings is the kind of book which is a mix of Fantasy and Investigative thriller. We usually don’t see this kind of World building books from Indian Authors, we are obsessed with our existing mythological world and exploring them hence many Authors stick to that and try exploring them or creating new stories around them. This book came out a breath of fresh air with a new world their own culture and history.

Note: I received this book free of cost from the Author and this will no way impact my honest review of this work.

The Author has weaved a brilliant story with new Mythical creatures called Aerials who are the solar beings (Sun is their main energy source) with immortality and superhuman powers (Super alien powers doesn’t sound cool you see). They were the beings once ruled Earth but due to the rebellion 600 years ago, the human race out threw them to their native land Vaan. Some of the Ariels stayed behind on Earth and why did they stay? What do they want?

Now, we have our Protagonist Ruban Kinoh who is the lead Hunter (More like a CBI Officer) who is specialised in killing the Ariels with Sif-blade (Super weapon which has the power to kill these Ariels) who gives trouble to humans. His home was destroyed 8 years ago by an Ariel with his Father and his best friend in it. We are also introduced to another character Ashwin Kwan from Zaini (A Nearby country of Vandram) who is on Vandram to know about the improved Sif formula which the country is trying to create. So, the Ariels have been lurking around and creating ruckus at various Sif mines across the country where Ruban and Ashwin are investigating. Now, you can connect the first paragraph and this. Who is Ashwin and why is he at Raagha? Did Ruban solve the case about Ariels? Is it just an individual incident or just a start of grand scheme of things? Read the book to know more.

Oof! That’s a very long summary of a book I have ever given. Interestingly this book does two things, one the complicated names which sounds like the Indian and Zimbabwean cross breed and it takes some time for us to get used to those names. Secondly, there are different worlds and the names of those Mythical characters sometimes sound the same but are different. They aren’t the problems but just a simple things I’ve noticed. Obviously, the Author has put so much effort in creating the World and we must definitely appreciate this which are some of the positives (Surprise! Surprise!)

One of the major issues I had with the book was at times the narrative is so great that pages go by fast and on other times it was major turn of because of the slow pacing and few unnecessary descriptions. A re-reading and more editing would have made the book few 100 pages less and even more interesting.

Some important notes to the Author:

On a whole the book is super interesting to read and definitely a good try in attempting something new. Yes, the book do have some grammatical errors and pacing issues which wouldn’t be a major problem while reading. Do give this book a try and I am sure you will enjoy it.

In the present world of Consumerism, we are spoilt for options, each of us has different preferences in choosing a Brand or a product, even though brands come up with various marketing initiatives to attract the Consumers ultimately their Customer experience decides if we would stay with that brand or not? A bad Customer Experience would make us stay away from that brand or we would think many times to choose a product from that brand. Why do you think Customer Experience plays a major role for any brand?

Hinduism is said to be the third most popular Religion by the population, yet there is no definite single religious text or a single god. Hinduism is home to so many gods and religious texts. This book Introduces Hinduism to everyone in a very simple manner.


I loved this honest review 🙂 I have seen readers talk all good about books but this review surely changed my mindset. Will check this interesting piece for sure.
#MyFriendAlexa #vigorousreads


The book sounds very interesting especially the super humam power thing.Also.I like how nicely you rebiewed and also gave feedback to the author.


Thank you for taking time to visit my blog Amrita. 😊