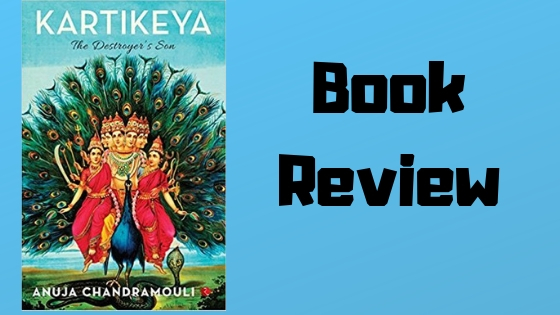 Note: I received a review copy of the book from the Author in return for an honest review.

Phew! I finally finished reading this book. It nearly took 5 months for me to complete it. No, the book is not Stephen King-esq big, but I personally had a hard time navigating through the book which took time. Well, let me not start with a bad note because the book is not really bad. In fact, the book is decently good and the Author has done enough research to weave the story based on the legend we heard about Lord Muruga or Kartikeya or Skanda or whichever name you prefer.

Oh! before going forward, I would like to confess that I know the whole legend of Lord Kartikeya. Thanks for being born and bought up in Pazhani one of the major destinations in South Tamilnadu, which is considered to be one of the 6 temples of Lord Kartikeya which are together called Aru Padai Veedu. Also, Unlike many in other parts of the Country, We Tamilians know the legend very well. Thus, I mentioned that the Author has done enough research about the legend to weave the novel as true to the actual legend as possible.

Being read many re-telling of gods from Hindu mythology, I grabbed this opportunity hoping to read the humanised version of Kartikeya, but I was taken by surprise because this book holds on to the core of the Mythology where magic and other elements were present. As the plot goes, Soorapadhuman and his brothers (Asuras) took over the three worlds from Indira (The Lord of Lightning, Thunder and Rains) also they imprisoned his son Jayanta. In order to get back his throne and his son, the Devas are assured of a Destroyer from Lord Shiva.

Surprisingly, unlike the Mythology the Asuras are not shown in the bad light but they are good at heart but the circumstances are what made, what they are today? and unlike many others, Lord Indira is “The Villian” of this story, which we don’t get to see often. Indian Mythology has romanticised his perversions and scheming in the name of him being a god.

On the contrary, the book keeps jumping to different stories in a hurry, for example, the incarnation of Lord Vinayaka. Lord Muruga’s decision to go down South of India or his wedding with Valli. This part of the book was completed in a hurry and maybe the Author should have put some cliffhangers and written a Part-2 of this book which would have been even more interesting to read. Of all these things, One major issue I had with the book was the usage of Words, I understand the Author has a good proficiency over the language but at times I felt she went too overboard to showcase that and another major grudge for me would be not including Veerabaahu, who was the Commander-in-chief during the war with Asuras but he was completely ignored in this book.

In a Nutshell, I have few issues with the book and the topmost of that is the usage of Language otherwise,, this is really a great book to know about Kartikeya, who’s story is less told in the Northern part of India. I’m not sure if, I should recommend this book and I am really not sure if I will read any of this Author’s book in the near future but I see many have actually liked the book. So, the choice is yours to take.


Really? Thank you so much. I will definitely try doing more Book Reviews 🙂


I am kind of wary of books based on Mythology nowadays. The stories I read and heard from childhood are all being distorted and manipulated by authors in the name of mytho-fiction. Your review was pretty honest and unbiased.


Ha ha ha… True but only handful of the Authors are really good in retelling. When it comes to Anuja she doesn’t retell mostly but tell the stories of less focused mythology figures. She mostly stick to the original material. But for me it is fascinating that these authors could weave a different story. It really need a lot of skillset to think a different story from what we already know.