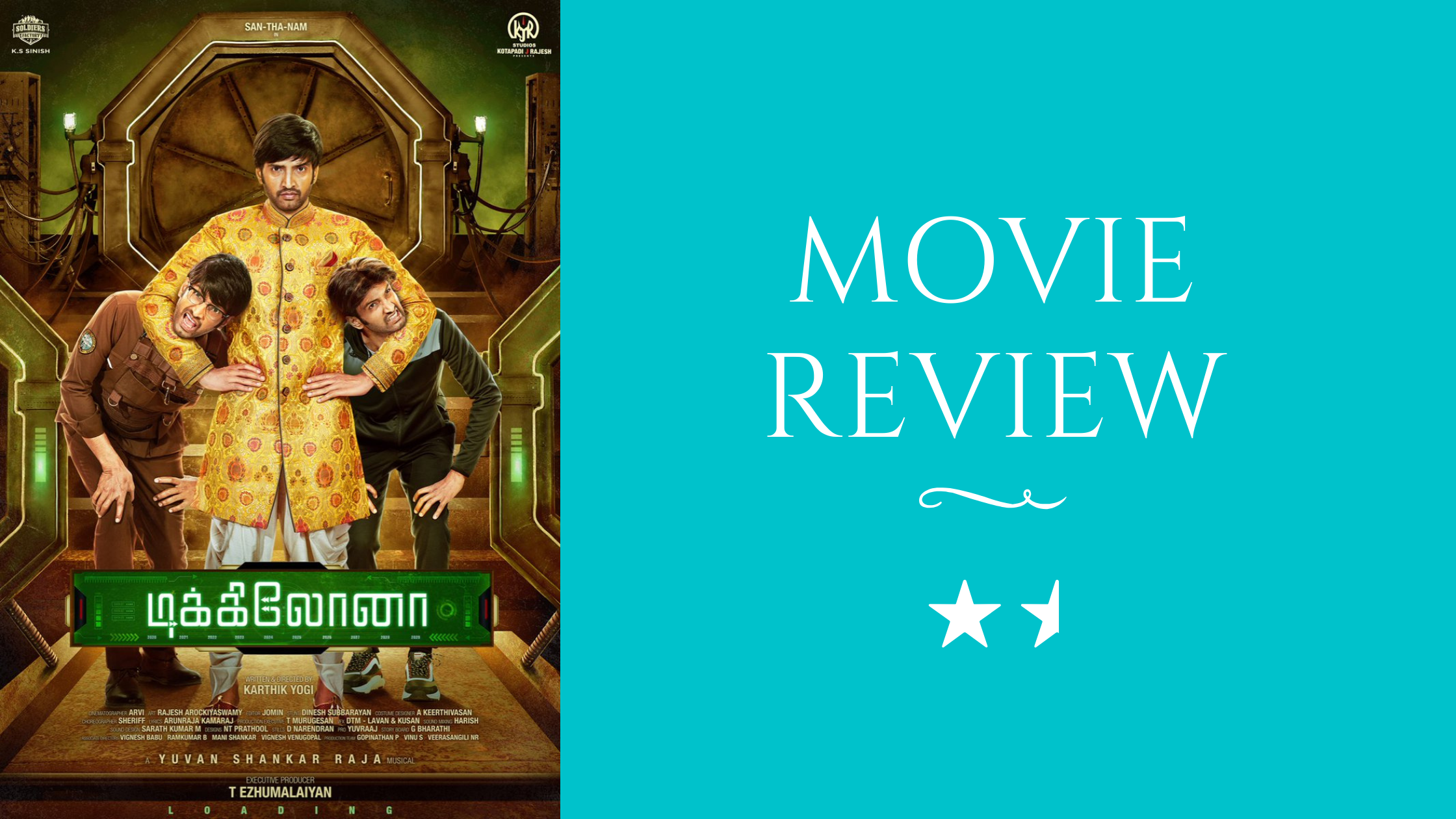 I really wished Karthik Yogi and Santhanam read this before making this movie, either we would have got a good comedy or would have not gone through the excruciating experience.

Santhanam is an EB lineman in 2027 who accidentally finds a group of scientists trying to build a Time Machine. Yogi Babu is a Janitor in that lab and a couple of accidents later Time Machine works, Thanks to Albert (Yogi Babu) and Santhanam wants to go back to the past to change that one bad incident, which is his marriage. I was reminded of that uncle from the Family WhatsApp group who keeps sharing wife jokes and all they are made to put down the wives if you dig deeper those were the men who wouldn’t help their wives, expect their wives to manage the house, kids and also go to work while they never move their bums out of the sofa. Santhanam and Karthik Yogi are that boomer uncles.

The heroines are one-dimensional deliberately so. Priya is shown to be a that bad wife who has to satisfy the Mother-in-laws’s unrealistic demands. Have to bear the burden of her husband constantly making fun of her father and to top it all the hero doesn’t do anything to support her. He lies to her and makes her believe to provide a decent life. The biggest problem is that the Director and the hero paints a bad picture of all these and glorifies the acts of the hero while the heroines are the ones who torture. If you scroll down Social Media you can find such men who keep complaining mostly about their wives.

In another instance, the hero lectures the second heroine on Freedom. When pointed out the regressive nature of that some Dupatta podunga Doli gang members come in support of Hero and reason with people with their usual abuses. All these dialogues and exaggerating incidents in the film are to drive a point that stems from losing the patriarchal status and the frustration of not being able to tame the wife. So many regressive dialogues and scenes, still people call this a fun movie, prove that there are audiences who enjoy such movies.

Even Yuvan’s music didn’t save this film but Anandraj and Muneeshkanth’s comedy to an extent save this booooring film. It is high time Santhanam re-thinks his comedy strategy because, in this supposed comedy film, there were instances I was like

and was more pissed than Santhanam listening to Manohar repeatedly saying “Yenpa enna nee innum paithiyakaaranave nenachuttu irukela?” Countering is different from body-shaming and when Santhanam started his career they were acceptable, audiences have evolved but his comedy didn’t.

This is that 987618679th film where they used Yogi Babu for body shaming, this time they dressed him like a lady, that’s all the difference. Tamil Cinema for the Nth time-wasting good actors like Yogibabu on such silly roles and the man also keep doing it. Please stop da, it’s so repetitive that we started mouthing his dialogues when the scene happens

Dikkiloona is regressive, Outdated, and a bad movie. Don’t waste your time watching this. If you feel bored please go watch 23-aam Pulikesi and that movie even after over a decade that movie will make you laugh.