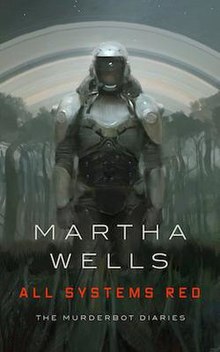 All Systems Red is the first book in the Murderbot Diaries series written by Martha Wells. It is a 6 book series with 4 Novellas, 1 Novel, and 1 yet to be published novel or novella? We have to wait for it. How often have you read a book with a Robot being self-aware?

In a distant future when humans have colonized other planets, the Company has to approve Planetary missions and supply Security Androids for the safety of humans. On a distant planet when a pack of 8 scientists conducting tests accompanied by a SecUnit (Security Android) which in fact has hacked its Governor Module (The controls the Androids) and downloaded unlimited hours of Soap Opera, Music and books.

The SecUnit calls itself Murderbot (They are part human and part Robot) and loves watching Soap Operas. Murderbot tells itself that it doesn’t care about humans but when a threat posed and it being a self-competent Android to think and act independently, it has surprisingly great empathy for Humans especially the team of humans it is guarding now. The Scientists team has a map that is sabotaged and who did that? Did they do it on purpose? What role did the Murderbot play in this grand scheme of things? Read the Novella to know these answers.

Yes, talk to Murderbot about its feelings. The idea was so painful I dropped to 97 percent efficiency. I’d rather climb back into Hostile One’s mouth.

I must confess All System Red is my second Sci-Fi book in English and I didn’t have any expectations whatsoever. In fact, I never knew such a book existed until the Bookclub I am part of making it the Book of the Month. I didn’t finish the book before the meet as usual. :/ I am such a disappointment you know.

Warily, I stopped the show I was watching. I didn’t like where this might go. All of the information is in the common knowledge database, plus in the brochure, the company provides with the specifics of the types of units they use. Which he knew, being a scientist and whatever. And he wasn’t the kind of human who asked things when he could look them up himself through a feed. “That’s true,” I said, very careful to make my voice sound just as neutral as always.

Nevertheless, this Novella was so much fun and I wish I dedicated reading this book before the meet and have attended it to discuss this series with fellow book lovers. Someone in our Bookclub called this a Pulp Fiction and after finishing this I really must agree. Since the story is told in the Murderbot’s point of view we get to see only what it sees and does but not What the humans do. The story is not dry with the Murderbot mocking humans instead it was laced with humor. I chuckled and laughed in a lot of places, such was the writing of the author. I am definitely going to read the other 3 Novellas and if I get a chance I will definitely read the Novel as well based on what I’m going to experience reading in the next three novellas.

Mensah, sent me a private message through the feed: I hope you’re all right.

Because You need me. I don’t know where that came from. All right, it came from me, but she was my client, I was a SecUnit. There was no emotional contract between us. There was no rational reason for me to sound like a whiny human baby

Overall, this is a really amazing book written with a lot of humor and a bit of sentiment and drama. I thoroughly enjoyed reading this book and I’m sure if you choose to read this you will too.

Have you read the Murderbot series? If, Yes, Did you like the book? and What are your favorite Science Fiction novels? Come, let’s talk in the comments.