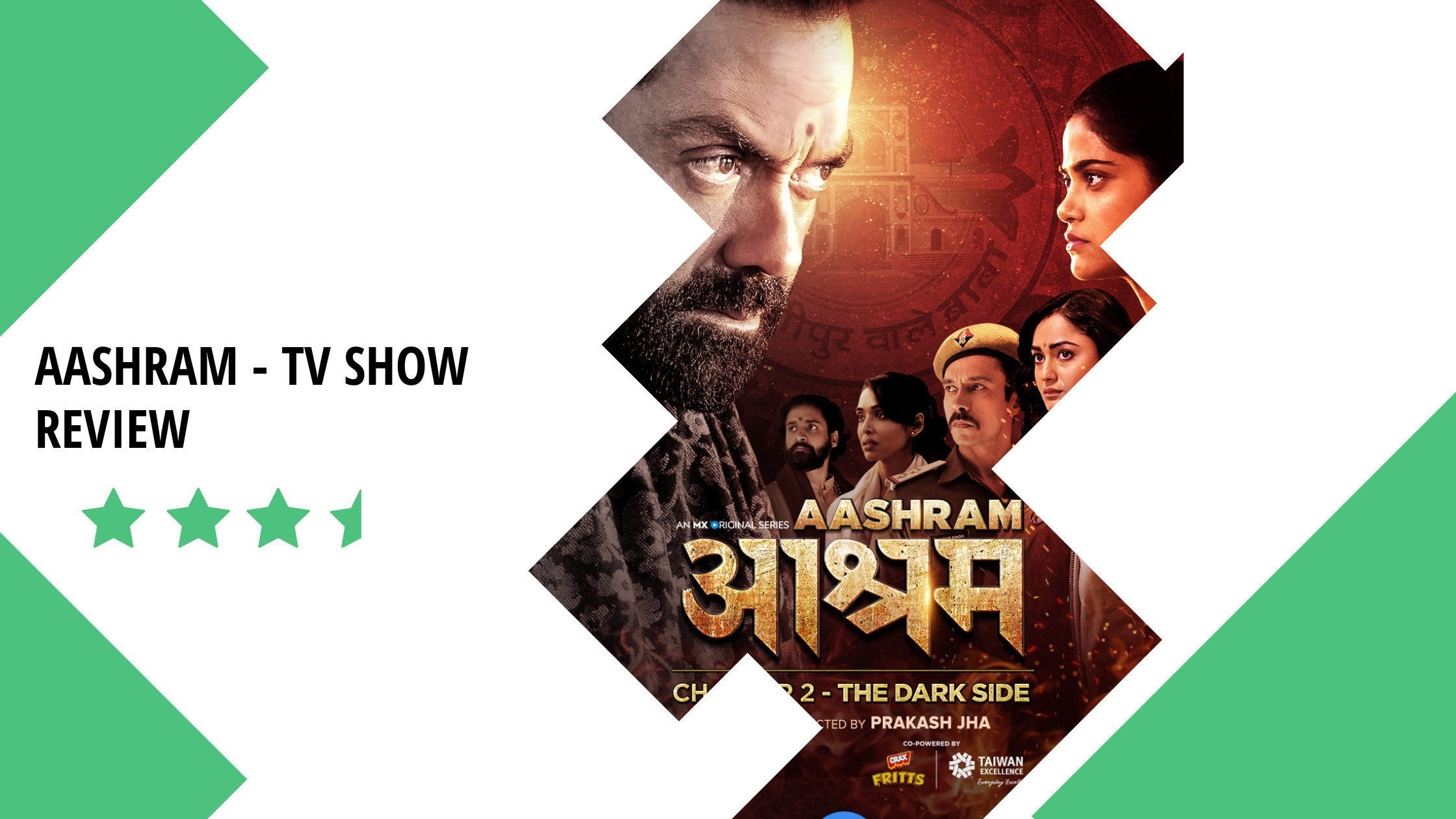 How often do we see TV shows or Movies at this time and age, takes a very controversial topic, get caught into Controversies, and still manages to tell a great story? Aashram an MX Original show brilliantly delivers it with ease and I’m waiting for its third Season.

Aashram is loosely based on the life of Self-made Godman Gurmit Ram Rahim Singh Insaan, also known as MSG. The show is set in the fictional city of Kashipur and the story follows the life of Pammi aka Parminder (Aditi Sudhir) who is a wrestler and her brother Satti aka Satwinder (Tushar Pandey), various instances push them to come in contact with the self-proclaimed godman of Kashipur, Baba Nirala (played by fantastic Bobby Deol), we along with them enter into the Aashram to find the dark secrets hidden into it. When Pammi and Satti are full of devotion towards Baba in the first season, they get to know the secrets of the Aashram in the Second Season. On the other hand, Police office Ujagar (Darshan Kumar) and Constable Sadhu (Vikram Kochhar) goes undercover to unearth the proofs in Aashram.

Aashram is definitely very ambitious in its setting, be the grandeur of the Aashram or the fictional city of Kashipur they have done a fantastical job with it. I must definitely write about Bobby Deol, haven’t watched much of his movies before but as Baba Nirala, he has this calm posture throughout the show, and when his cunningness comes out, his face changes which was really impressive. He did a phenomenal job in that.

When they start the show with Pammi trying to escape the Ashram, they jump to the flashback. This happens in the first episode of Season 1, only for them to revisit almost in the mid of Season – 2. I wish they managed to build these escape scenes simultaneously which would have made much more sense since it’s a TV show and not a movie.

Although Season – 1 had very good pacing somehow it became a drag in Season – 2. I understand they were trying to establish the dark secrets of the Aashram, Undercover investigation, political shenanigans and much more takes place but when you see it overall, it doesn’t add much weight to the story. I hope they fix this in Season – 3.

The bigger problem with this show for me was the way, they showcased people of depressed Caste. They are of two extremes, on one end they are naive and on the other hand, they are bad monsters. They made sure to showcase the hero from Upper Caste who is full of privilege and hypocrisy. When the show started he failed to take a complaint from depressed caste person and later when he meets the heroine he immediately becomes a good man???

In another instance, the hero gets drunk and cries to the heroine that he just couldn’t become IPS because of 1 less mark and as a typical Savarna he blames it on the reservation, and in a typical fashion, he blames the other person from the depressed community who became IPS. In the same breath hero, Ujagar mentions that he feels like a loser because his whole family holds a higher position in the Police force, forgetting his privilege. If you haven’t guessed it already, the one who becomes IPS officer through his reservation helps the Villian 🤣

The bigger problem is that these UC’s don’t have an iota of idea about Reservation, they sit in their high horses oppress people, gain the social and economic capital through this oppression and cry that they couldn’t get a college seat because of their inability to score and blindly blame on reservations. It is very easy to do that way no? If only they handled this issue with some sensitivity and understanding, I wouldn’t have wasted two paragraphs ranting uuuffff!!! I don’t know when will they even understand.

Overall, the show was really well made with few gripes I had. I really hope they handle the caste issue with more sensitivity and understanding instead of appropriating and being anti-reservation. Have you watched Aashram? How did you like it? Do share in the comments and let’s have some fun conversation there.